This past week-end was packed. I will focus on the storytelling stuff and later write to remind myself of the other stuff that kept me hopping. Without Jim's help I would never have made it.

Let me tell you what's happened. When I wrote the blog post for this - Andy Offut Irwin and Donald Davis - I realized it should be two posts - so I am splitting it.


A Bard on the Road: Andy Offutt Irwin 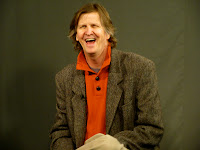 Andy Offutt Irwin
Andy Offutt Irwin was in the area telling stories at five libraries in Virginia - and a house concert in Silver Spring, MD. That gave us time to schedule an interview with him on Stories in Focus at Channel 16.
I love the chance that television show gives me to sit down and chat with folks - people I have seen work on the stage but never had a chance to really talk with - more than a "Hey, how are you - loved your show "- among a crowd of people gathered around saying the same thing.
I expected the interview to be FUN and it was - after all Andy is known as a zany comic storyteller. He has a flair for improvisation and he is used to keeping crowds of thousands in stitches during his shows. We did laugh. He was funny - but we were conversing - (I strive for that) and I had a chance to meet him as a very thoughtful guy who works hard at his craft. Besides chatting with me  he told two of his Aunt Marguerite stories - the character he has created to speak his and her mind.
Now I have to tell you - I just love Aunt Marguerite and the first time I heard him tell her stories Marguerite sounded so much like my aunt I thought she was a real person - well she is a real person - she is another voice from Andy. She is real - not just because he can DO voices - she is real because Andy has an incredible ability to observe people in their world and then have Marguerite speak from the truth of their experience. OK  I know. He, as comic performer has to "go for the joke' - he does and he gets it - but in the nuances of her character I recognize women I knew growing up in North Carolina - maybe even some of the southern woman I am today. I am really glad Aunt Marguerite travels with Andy Offutt Irwin. Maybe you are too.
I can tell you they charmed the audience at the House Concert in Silver Spring, MD Sunday Night.
When the station has the disk ready for me I will post it here hopefully by early February.
Posted by ELLOUISESTORY