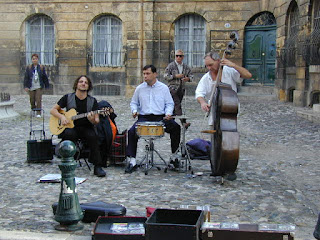 Arles Street Musicians.
Jim and I are staying home this summer, I am sad to say. So I find myself wistfully flipping through tourist shots from other trips.
Posted by ELLOUISESTORY 2 comments: 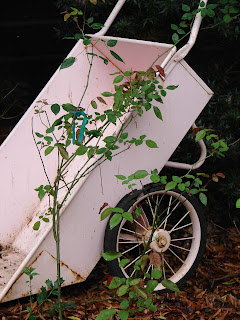 "It's never too late to be what you might have been." T.S. Eliot
Posted by ELLOUISESTORY 2 comments: 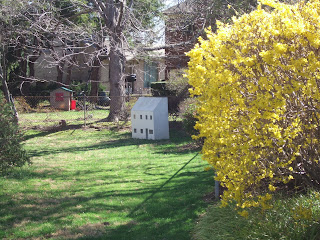 A shift of topic.
These are days when its really worth noticing the every day - and celebrate the appearance of Spring and a memory.

When I drive into our driveway I see this doll house in the neighbor's yard - and I am glad a new little girl is loving it.

Jim made it for Karen and Robin in 1964. He made it big so they could make their own furniture for it. They used big nails, scraps of lumber, and bits of fabric out of the sewing basket. They set up shop in our garage and designed and hammered and pretended. Lots of things happened in that house. The ceilings of the two floors were high enough for a Barbie to stand up - that had been one of the requirements.

After they out grew playing with dolls the dollhouse doubled as a book case/catch all in the rec room. Then it was moved to the basement. It was amazing how much stuff could be stored inside it.

Last year we noticed that the neighbor children were really the right size. So we brought up the dollhouse and offered it to them.

How could you turn it down?

This doll house is experienced.

It has staying power.

Just like all the things that Jim has builds.
Posted by ELLOUISESTORY 3 comments: 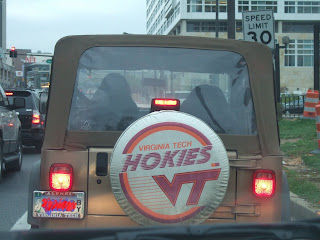 Before April 16 I would not have noticed this car in front of me at the stop light, much less have taken a picture of it. Now, there seem to be reminders everywhere.
Reminders that lives are changed.
An article in Inside Higher Education explores how works in creative writing classes can reveal possible psychological problems and the challenges teachers face when these signs occur.

Cho Seung-Hui, the senior Virginia Tech English major who apparently killed 32 people on campus Monday before turning the gun on himself , seems to have fancied himself a writer. Albeit one with grotesque tastes: AOL’s blog published two of his short plays Tuesday, one of which, “Mr. Brownstone,” features characters who fantasize about killing a teacher and “watch[ing] him bleed.” The second, “Richard McBeef” discusses pedophilia and concludes with a stepfather killing a 13-year-old boy soon after the boy’s attempt to forcibly stuff a banana cereal bar down the stepfather’s throat.
http://insidehighered.com/news/2007/04/18/writing for the full article.
Posted by ELLOUISESTORY 3 comments:

Too Much; Too Much 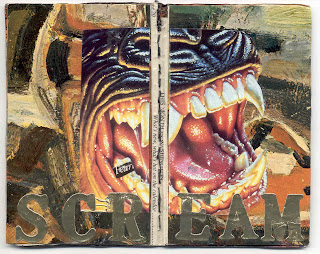 Last week Jim and I drove home from North Carolina over Fancy Gap and then turned from Highway 77 onto Highway 81. We come that way to enjoy the beautiful vistas of the Blue Ridge mountains and the Shenandoah Valley.

Monday a 23 year old young man shattered that silence with gun shots in Blacksburg, VA and killed 32 - students and professors - at Virginia Tech - and then shot himself.

Since then - minute by minute - the media piles up the details. Pictures of the lost, heartbreaking stories of promising futures stopped before they blossomed. A community stunned and grieving; a college reeling from this blow. How could this happen here?

Along with the story of the victims emerges the story of the shooter - a quiet loner with a raging storm inside him. And worse, it comes out, some recognized the danger. Some were afraid he was a threat -to himself they thought- - - because anything larger was unthinkable.

What could they do?

A time bomb ticked on.

Have we lost sight of something here?
Posted by ELLOUISESTORY 3 comments: 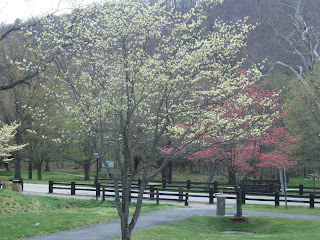 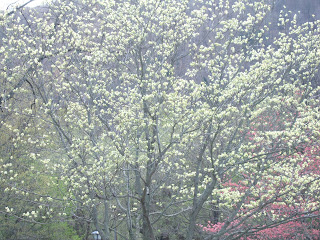 Brings back memories and makes me feel good to see them.
Posted by ELLOUISESTORY 3 comments:

Back at home - tired and happy - after a wonderful week-end in Bethlehem, PA for the Lehigh Valley Storytelling Festival. It was a very full week-end.

The Friday evening story concert was at Godfrey Daniel's Coffeehouse - a good place for storytelling - seats more than 75 but still feels intimate, and its a warm, cozy atmosphere where you can feel a connection between teller and audience.

In an early pre-concert Charles Kiernan performed as Mark Twain. He actually favors Twain, add to that his luxurious head of long white hair, period white suit ,and stogie - he becomes Twain. It was as if Samuel Clemmons had risen up and come to give one of his famous recitations. I enjoyed the style and presentation, as well as the humor. Of course there was the jumping frog and some bits from Clemmons time on the Mississippi - all well done. 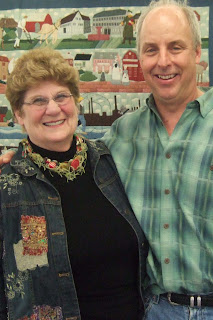 I told three personal stories, two of family life and the third the story of my recent encounter with a Harley-riding "tattooed-man". I felt very connected to the audience and they listened a good performance from me. Then they told me know they liked the stories. That felt good.

Bill Harley is a main attraction because he does not disappoint his audiences. Stories, music, his warmth and humor - what more could you ask. "Barbie's Head is Missing" was a real crowd pleaser as well as his adventure -" walking to the mall". I was very touched by his story of returning to a childhood neighborhood where everything was changed and he felt totally strange.

Saturday morning I sat in on David Joe Miller's "business" workshop - - rich with tips- which he has self-tested. I admire how he has re-framed his experience in the car business to serve his storytelling career. The material was on target (with valuable hand-outs) and he was an enthusiastic and generous presenter. He closed with a story and I really appreciated his "pure" southern storytelling.

Jim and I did some sightseeing in the early afternoon, checking out the old Moravian Village, the Banana Factory Arts Center, (even stopped to watch some of the glass blowing) and stopped in to the Moravian Book Store - glad it was near closing because I would have been overcome. One disappointment - near-by thrift shops were closed.

Made it to Bill Harley's afternoon program for kids at the Bethlehem Library. He played his guitar and sang, involved the kids in simple lyrics, told stories they loved - especially the one about Pirate Annie who plunders "underwear". There was lots of laughing as parents and kids really enjoyed themselves.

The Saturday evening program was "Girls Night Out" on the Lehigh University campus. In “Two Cronies” Cora Hooks and Mary Wright tackled material about women turning 50. It all rang true emotionally. The program was funny, poignant, and well done.

Before Judith Black's performance there was a Wild Women Reception in the lobby.While people were munching chocolate Storyteller Kathy Pierce rose up and prompted the group to tell stories about wild women from their lives. At first the women were hesitant but Kathy kept cheer leading til stories started to come forth - and once the spigots were open there was no stopping the flow. A warm and moving personal sharing.

Judith Black performed her long and complex piece about menopause - really funny as well as poignant. She included three different versions of Snow White (African, Italian and Celtic) from the mother's point of view. Whoa! I enjoyed it; I admired it; and I was glad to experience it.

There were Fringe performances Saturday afternoon which I heard were quite good. I missed Sunday’s Sacred Stories and a program tailored for April Fool’s day because I had another commitment in Maryland.

It was a full STORY week-end. Some of my most compelling memories are of the Lehigh Valley storytellers -- warm, friendly, supportive and welcoming. I was talking with a participant, a newbie teller, Sunday morning and she told me how glad she was to have attended this week-end. " I found a real community of storytellers." All of them worked hard to pull this off and it seemed seamless. That's an illusion that takes some doing. Bravo.

I am so glad to have been a part of this wonderful event. .
Posted by ELLOUISESTORY 3 comments: