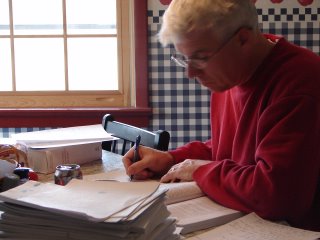 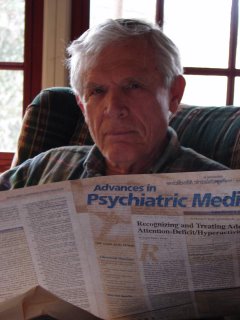 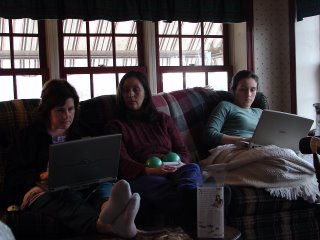 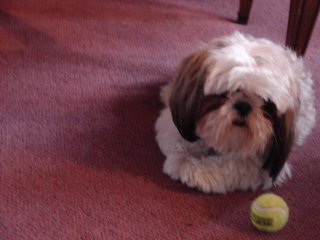 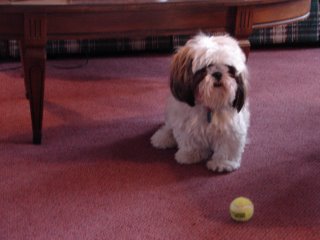 Things are busy for everybody in our family so we are having fewer week-ends at the place we call "the Apple House". We call it that because it is on the edge of other peoples orchards in rural PA. So the week-end we did get away together was precious - not that we did anything particularly special - we didn't - its the joy of being together.

I have to add - we can be together without the sound of newscasters blaring out the latest - their voices filling the space - because we have never hooked up an antenna or cable. We choose our own entertainment - either the delicious quiet, general conversations or we watch movies - from old classics to a newer run DVD from Blockbuster. Last year when Karen added her set of I Claudius to the Apple House video library, I relished every moment of revisitng that PBS classic.

When these family times happen I often think of Thornton Wilder and his play Our Town - when he has the Stage Manager tell the young heroine - Emily, I believe - who wants to go back to the living for just one day - "chose an ordinary day - that will be special enough."

In the fast paced life of today sometimes our whole family ( the East Coast contingent anyway ) is lucky enough to have an ordinary day together it is very special.

These days with grand-daughter, Juliana temporarily further East in London - and our West Coast group, daughter Robin, her husband, Brad, and their 3 sons, Jamie, Danny and Scottie holding firm in SF. Jim and I treasure all moments "in the bosom" of any part of the family.

I tell a story about my grandmother, Ellie Hall Baer, which starts off - I lived one block and two houses from Granny - and I could go there anytime I wanted to. Never realized that would be "once upon a time" in my own life.

( pictures; Jim, Jr works on a class he is teaching at Georgetown U., Jim, Sr. catches up on journal reading, no TV but we do have wifi - a concession to modern reality - Karen, Monica and Alison juggle laptops and search the internet, Leia parries with the ball, hoping someone will toss one for her.)
Posted by ELLOUISESTORY 3 comments:

At first glance the snow is a beautiful and perfect white blanket for the world. It erases blemishes and muffles all sound. 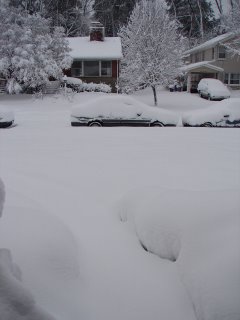 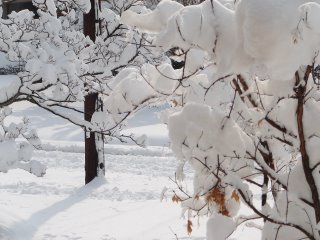 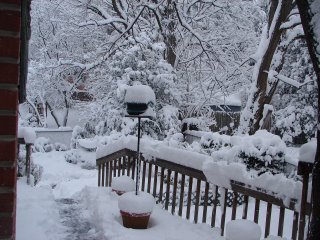 Then reality sets in and the work begins. Fortunately the snow is light weight and fluffy. Karen and Jim clearing off the cars in case the snow plow comes through and we can go somewhere. I watch it all from behind the camera. 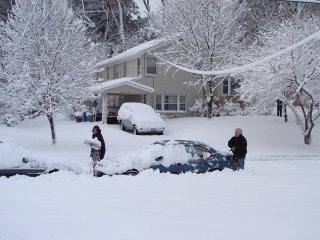 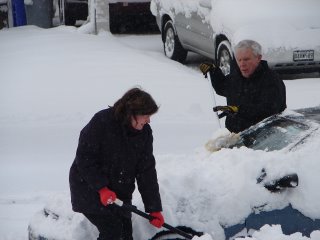 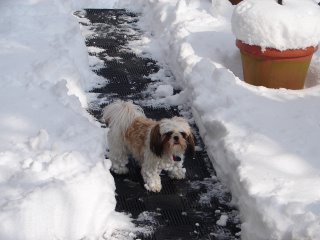 Leia discovered a new playground and enjoyed it most of all. Except - enlarge picture and notice the feet and legs - she comes back into the house covered with little ice-balls where her fur is matted with snow.
Posted by ELLOUISESTORY 3 comments:

Common birds seen near the creek in Rock Creek Park.
Stopped the car and pulled out the camera. From the front seat I managed to get these shots.
I am enjoying noticing the birds around me - taking notice of things I have just been taking for
granted.

A Canada Goose and a pair of Mallard Ducks. 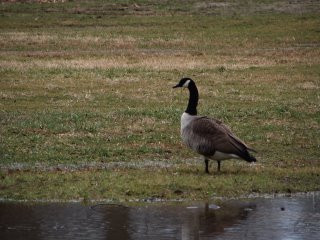 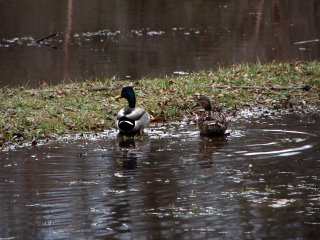 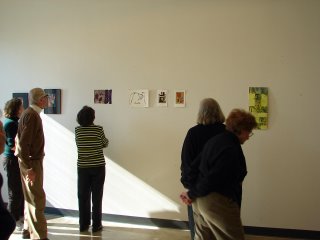 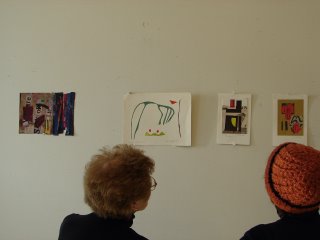 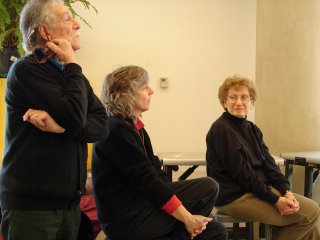 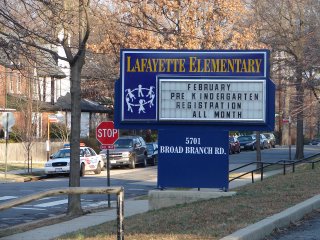 I have started the 06 series of Audubon Storytime programs in the schools. My head is filled with animals that talk and play tricks.

Leaves no room for the gloom and doom of the news. That's a secondary benefit of being a storyteller.

Goes without saying that I thrive on telling the stories to larger groups of children. Beyond that I enjoy going to the schools. each one has a different flavor and you catch that within moments of walking in the front door by the sound systems and their music; the school DJ and announcer; or the quiet lack of that practice. I like the walls - where the students work if displayed.
This year I have decided to photograph some aspect of the school building and something from the walls. 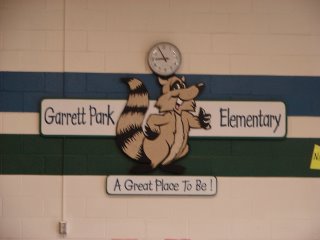 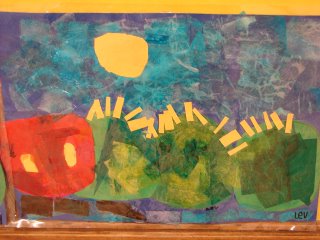 At Garrett Park there was a wall of collages based on Eric Carle's, "The Hungry Caterpillar". This was my favorite. 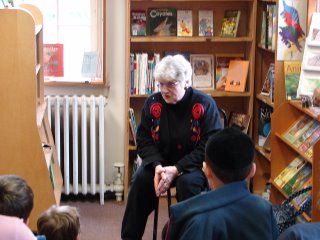 Started the week at Wood-end. The February Storytime in the Audubon Snactuary Bookshop.
Posted by ELLOUISESTORY 3 comments:

I Just Got Tagged

Its late. I was just surfing around when I ventured into Gwynn's blog and got tagged. This is a first for me - so here goes.

Here are the rules:

1. Go into your archives.
2. Find your 23rd post.
3. Post the fifth sentence (or closest to it).
4. Post the text of the sentence in your blog along with these instructions.
5. Tag five other people to do the same thing

To my surprise the most impressive thing for me in OKC was the Oklahoma City Bombing Memorial.

This is the 5th sentence from a post on 8/15, "Remembering Oklahoma City". I had just returned from the National Storyteller Network Conference.

So,
If you are reading this
NOW -
YOU are tagged.
Posted by ELLOUISESTORY 2 comments: 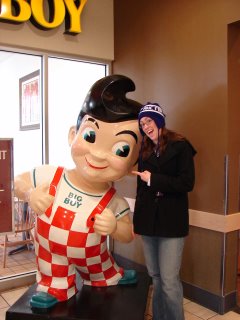 Granddaughter Juliana stops at Bob's Big Boy at Maryland House on Hwy 95 N on her way to the Philadelphia Airport for a last bite of USA fast food before flying off for a semester in London.

She is excited.
Her mother is a little sad
as her first chick steps to the edge of the nest.

To tell the truth
I am just plain jealous
thinking of the adventure ahead for her.


How did this happen -
overnight she has reached a point to wing off on her own?

Everything feels like its about time.
Posted by ELLOUISESTORY 3 comments: 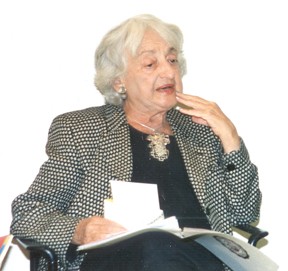 Betty Friedan died Saturday February 3, 2006
Her 85th birthday.
My daughter said, "Didn't you know her."
"yes, and no."
Like millions of women I read The Feminine Mystique when it was first
published. I was a young mother at home with her three children. Reading her book gave me words for the restlessness I felt. That book gave me ideas - that I might do more and be more.

I never dreamed that the paths I took -
to a small Catholic women's college
to a NOW consciousness raising group-
to becoming an activist-lobbyist on behalf of women artists-
to my first REAL job as ERA Campaign Director for the League of Women Voters-
would bring me close to the woman who prompted me to open the first door.

As an artist-activist I was an eye-witness and minor player to many things of that era -
Marches for ERA, IWY Houston, United Nations Conference on Women,
Nairobi, Kenya.

ERA brought people who were working to pass it together. I talked with many people I would never have dreamed I would meet much less strategize with. One was Betty Friedan. We had several phone conversations; I sat with a group in her New York apartment. And one morning when she called me at the League on ERA business I thanked her for her book that took the hook out of women's cheeks.
"You are the only one who could do it - if anyone else wrote questioning the roles of women and men it would seem they were attacking you."

So, did I know her. Not really. Did I respect and appreciate her - absolutely. She was a forward looking, strong woman - with the courage to stand up and take risks...and that's what women needed.

Was she always right? I doubt it. But she started the movement that opened doors and gave women choices. I am most grateful for that - for me, my daughters and my grand-daughters.

Thanks, Betty.
and
good-bye.
Posted by ELLOUISESTORY 2 comments: