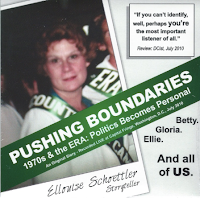 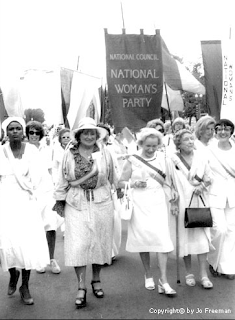 In 2010 I told my new story, Pushing Boundaries for the first time at the Capitol Fringe in Washington, DC.  I have told it often since then and I always appreciate an opportunity to relive those days as I tell my story. Afterwards  women stop to tell me bits of their story during those days and what they did.  Often there were tears – always there were hugs and laughter. It’s our history

She’s tall, very thin and lovely. Dressed in a black long sleeved sweater over long black wool gaucho pants , also wearing boots. An elegant silver Navaho belt is draped casually around her hips and a heavy silver Indian bracelet at her wrist reminded me of  a Wonder Woman bracelet. A large hammered silver ring accentuated her long slender fingers and her beautifully shaped nails. Along with her trademark straight hair and aviator glasses. Elegant, understated – she shows a careful image.

Fascinated, I watched the way she gestured with her hands. Gloria Steinem exudes style.
But more she looks at everyone in the guest line individually with a gaze  that makes you feel special.
I had not seen Gloria in about three years. As I watched her I thought she must be a bit like fine wine – she gets better with time.

I was moved by her talk about her book tour for her new book,Outrageous Acts and Everyday Rebellions –how people tell her their stories. She says,  “ I feel like an heiress and I have to figure out how to share the stories back with everyone.”

She graciously acknowledged all the women in the audience , “You who do the work here and in Washington – how much we all owe you.”
It is so rare, in my experience that I heard anyone acknowledge those working in the fields.

I felt memories stirring – of the excitement in Houston for the national  IWY meeting – of having the feeling it could all be done – of having heroines like Bella Abzug, Gloria Steinem and so many others – that was all before things turned negative – when I still felt energy and enthusiasm for the ERA Campaign.

When I felt all the idealism – saw only possibilities not difficulties – was too naieve to realize the obstacles ahead for women trying to pass the ERA.

Where did that feeling go? What happened?

Jim said later when I told him about it the loss of feeling and the disappointments.

Women across the country poured every ounce of their energy into the campaign for 10 years  of trying to pass the Equal Rights Amendment were squashed by the failure to pass it.
All that and we came up empty.

-------------------------------------------------------
August 15, 2016
Today, 33 years later, I found a small journal with this reflection on Gloria Steinem in it.  A rush of memories. I wrote the essay when I got home from NYC where I attended the book signing for Steinem’s book, Outrageous Acts and Everyday Rebellions.  The large open lobby of the Equitable Life Assurance Building was packed – feminists standing in line for Gloria’s signature and chatting with old friends and other ERA Campaign veterans. It was a grand reunion as well as a celebration of the book.
in 2016 - - there is a lot of hope in the air for the November 8 election outcome.  And, I am so hoping there will be large and small gatherings across the county to celebrate the first woman US President.

April 2019
Well that did not work out like we hoped. 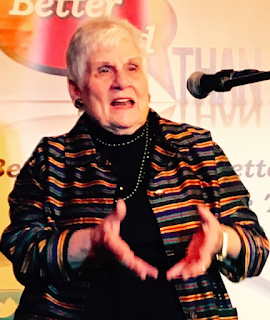 .
Pushing Boundaries
Story and Afternoon Tea
Wednesday, May 1, 2019: 2:30pm
Carriage House Cafe & Tearoom
1048 Washington St.
$25
Pushing Boundaries is a story of Schoettler's coming of age in the '50s. By 1970 she, like hundreds of other women, joined the fight to pass for the Equal Rights Amendment to secure equal rights for women. It was heartbreaking when it was lost June 30, 1982.
Ellouise is a nationally known storyteller, Maryland local cable show host and producer of a storytelling series. Her "Flesh on Old Bones" workshop helps participants turn personal history into compelling stories others want to hear. www.ellouiseschoettler.com
Posted by ELLOUISESTORY No comments: