Connecting people across differences and generations through stories. 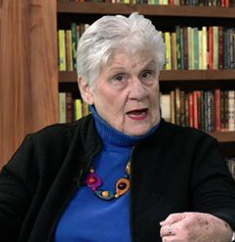 "Ellouise Schoettler's work reminds us of what is best about being human: deep emotion, strong values, unfailing courage and gratitude for those who came before.
An Uncommon Artist."  Elizabeth Ellis, Storyteller


Chevy Chase, MD resident Ellouise Schoettler is a North Carolina native and year professional storytelling veteran.  She calls herself an "old-time Southern teller," just like the family storytellers she grew up listening to on the front porch and around the dinner table.
Ellouise blends personal experience, memories and history into programs which voice to ordinary people.
Today she tells her original story-programs coast to coast for adult, family and youth audiences at various venues including festivals, colleges, libraries and genealogical societies.


New Trilogy: Over There
Stories of American Women during World War One. 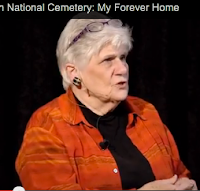 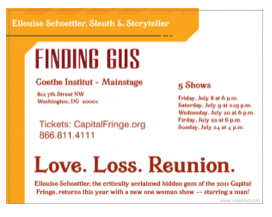 A story of love, loss and reunion which mixes family history and genealogy into a story of finding a lost family member. 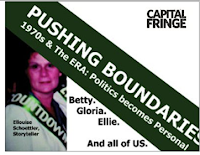 A personal story of how a 1950s housewife morphed into a national activist for the Equal Rights Amendment.

Performed in April 2013 for the State Meeting of the League of Women Voters of SC. Spartanburg, SC 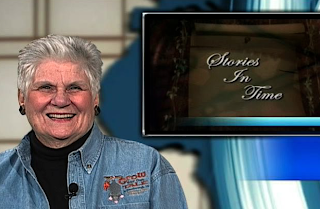 Stories in Time - In Focus
Ellouise talks with a guest about storytelling. When it is a teller they perform a story.
Tuesday:       10 PM
Wednesday:    7 PM

Programs are available on the MMCTV.org website under VIDEOS. Also archived.
Ellouise also posts them on her blog: ellouisestory.blogspot.com

A Taste for Stories - a recent program on Stories in Time

From Ellouise:
This is storytelling like you would hear if we were sitting on the front porch. I just made it up as I went along. In the North Carolina of my childhood that was the way it was done. I still like to tell my stories with the words just tumbling out with one thing reminding you of another and finally they all bind together. I hope the story prompts you to jump in with your own memories. Tell them to someone.


BLOG:
EllouiseStory - the blog Ellouise has written for ten years