About 5 years ago I began to research World War I and think about whether there was a story I wanted to tell. A lot of that came through the family stories my Aunt Catherine told me about John Walter Cobb - the uncle that had died in the Great War and was buried in a US cemetery in France.

His mother went to France on a Gold Star Pilgrimage in 1930 to visit his grave. 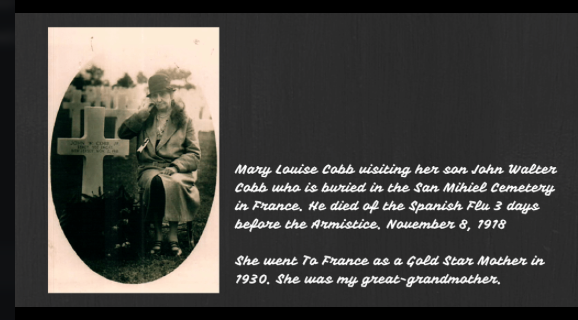 I considered working on a story for John Walter but then I became intrigued by continuing my pursuit of women who served in the US military in France during WWI.

Walter died in November 1918 and I intend to have more of a story about him ad his mother by then.

Its an important story for me and it will wrap up some history for our family. That's important to me.
Posted by ELLOUISESTORY 1 comment:

I hope you will excuse me for bringing up the subject of World War One so often. I can't help it. You see my head and often my heart is in France some part of every day. With the internet there is no limit to the world of information, the pictures, the history and access to personal stories. I am grateful for every bit of it - although there are times when it is overwhelming. Yesterday I was fishing for more pictures and I had a good catch.

When you look closely at this picture where the nurse is working on a single patient who is surrounded by many, many more waiting to be taken care of. Is that a corp-man standing by with surgical scissors in his hand and extra bandage or a fellow doughboy who's stepped in to help. The nurse is wearing rubber gloves and using a larger instrument. She is clearly confident and in charge of the procedure. The rubber gloves and surgical gown she has on say they hope they have a sterile field as they open or re-bandage his wound. Everyone appears calm and confident even while treating this wounded man on a stretcher on a crowded piece of ground. I imagine she is practiced and perhaps even numb to the situation.

Johns Hopkins Hospital, Baltimore, MD was one of the US university hospitals asked to organize a medical unit for France.Their staff included 64 nurses, all graduates from the Johns Hopkins School of Nursing.

These Hopkins nurses are the women I have researched to create my new story Ready to Serve.

All the reports and stories
of nurses on duty at the Base Hospitals in France are similar in that the work was hard and required homeric endurance, the living conditions were bare and difficult, and the weather was harsh.

One wonders if the nurses had any idea how difficult it would be for them before they volunteered to go.

I doubt it - but I don't think they would have changed their minds. From everything I have read all the nurses who went to France were determined, skilled, compassionate women who wanted to help the wounded.

After the Armistice Bessie Baker, Chief Nurse of the Hopkins Unit, wrote in her report to the Red Cross: 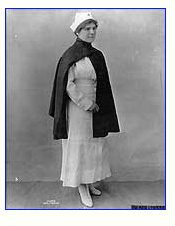 While we sat swathed in blankets around those miserable little French stoves and breathed upon our numbed fingers and waited for the monotonous hours off duty to drag by, we nurses tried to puzzle out the meaning of war, of those sick boys on the wards, or our own ridiculous plight.

We could not get very far with most of our discussions, but there was real comfort to us at least, in one of the doughboys words:

" the last thing I knew, I was out and over the top. ... I opened my eyes and there above me was a nurse    with a Red Cross on her cap. I just turned over and went to sleep, because I knew then that everything would be all right."

My new story Ready to Serve is drawn from the letters Maryland nurses wrote home while they served in France during The Great War. I have filled in gaps the censor sliced out of their letters by reading old newspapers.

June 14, 1917 - the Johns Hopkins Base Hospital 18, the first medical unit sent to France sailed from New York on the USS Finland in a convoy of 18 ships, many carrying the first American troops going "over there'.

The papers of the day across the country reported the departure, almost always naming the eminent  and almost eminent Hopkins doctors who were part of the medical unit.

Also shipping out that day were 64 nurses from Baltimore, all graduates of Johns Hopkins Hospital School of Nursing. The only nurse mentioned was Chief Nurse Bessie Baker... except for hometown squibbs when they named the  "daughter" or local citizen.   Often someone at the local paper saluted the "lady" mentioned by adding the following excerpt from an article in the Baltimore Sun.

The full ending of the original article. 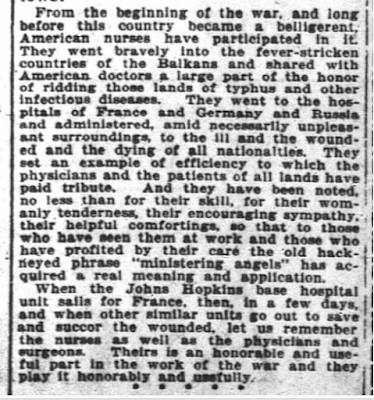 Research opens your eyes doesn't it?
Posted by ELLOUISESTORY 2 comments: