When I read today that the RBBB Circus is closing down in May 2017 I felt a wave of sadness at the loss of the 146 year old spectacle.  I went to my first amazing RBBB circus in Charlotte in 1944 when I was 8 years old. There were many others - with our children in other cities and I have several stories I tell with the Circus at the Center. I could not resist going back on Wednesday in 2008 - to see the spectacle and to ignite memories.

This is a copy of a blog post I wrote in 2008 after Juliana and I spent the day at the Ringling Brothers Barnum and Bailey Circus at the Verizon Center, Washington , DC.

Grand-daughter Juliana and I rode the subway downtown and the first thing we saw when we emerged at Gallery Place were the trailers parked along the streets near the Verizon Center. The circus carries a lot of gear. Each trailer is numbered and the ones we walked past were 66, 65 and 67. 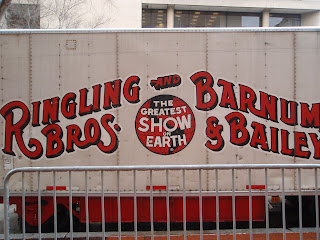 Our seats were right down front.When we sat down we struck up a conversation with the smiling man and his daughter who were sitting next to us. After a while he asked up, " Are you ready for your surprise?" 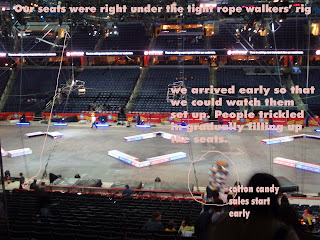 "You know - you're sitting right up front."

"Does it involve water? Should we be wearing raincoats.?"

He laughed . "No no, nothing like that. Its a good surprise. Just relax. You'll see."
Hmmmmm. Ok, I thought. Juliana and I looked at each other, shrugged our shoulders and went back to watching the place come to life.
Men in black were busy on the center floor. Putting out the rings, setting up equipment. Clowns appeared. As the stands filled more clowns ran around the floor, coming over to the crowd, performing tricks, waving, charging the atmosphere. One clown tried to jump over the railing in front of us to get into a little boy's lap but never made it - one prat fall after another.

At precisely 10:30 am the band struck up its music, Tyrone McFarland, the Ringmaster appeared - - the Greatest Show on Earth opened as the audience cheered. How can you describe a spectacle as it unfolds before your eyes. The circus is bright, colorful, and glittery and when the delightfully costumed clowns and the performers in their shiny, sequinned costumes, riding elephants and pracing horses, parade in front of you - well, your imagination takes over and you enter the a world of fantasy and fun.

The star of the show was Bello Nock. The show was billed as Bellobration. 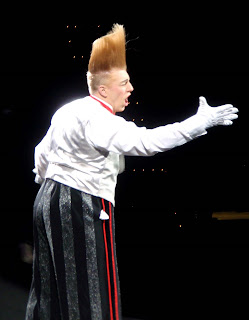 Bello is a multi-talented guy - known for his hair-raising tricks. - hence the hair-do. He sings, clowns and scares you a bit with his sky-antics - as he climbs a pole and then performs tricks far, far above the crowd - and later climbs all over a rotating machine as it spins high over our heads.


He shows his nice-guy ness when he brings a couple of youngsters from the audience onto the floor - center stage - to help him with his stunt. He treats them with respect and kindness and puts them at ease surrounded by thousands of strangers.

Other enjoyable acts: The acrobats who stack themselves five high by being propelled up to the next catcher. 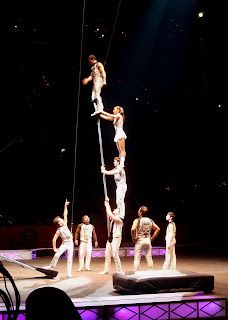 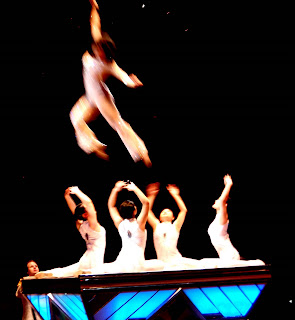 Trapeze artists who rise over-head and then amaze and give you a catch in your throat as they swing back and forth, higher and higher and then jump into the hands of a "catcher."
All the excitement I remembered from when they thrilled me as a kid.

Ringling Brothers Circus is pure entertainment - and it winds up with the classic elepant march and display. 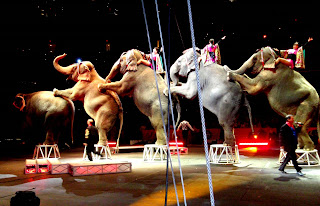 And was there a SURPRISE? I should say so - it was US.

Juliana and I not only came to the circus - we joined the circus and it was an absolutely thrilling surprise.
As the music for the finale of the first act started a colorful six car mini-train chugged out on the floor. Each car was filled with clowns. They pulled up and stopped right at our seats. One of the clowns walked over to the steps and held out her white gloved hand to me and led me onto the sidelines. Juliana and forty other people - adults and kids - followed. First a clown placed an orange "Bello" hairdo on each one of us and then led us onto the train cars to take their places. 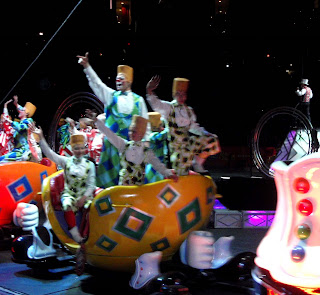 The trains moved onto the center stage. We were laughing and waving to the crowds as we moved among the clowns and performers, animals, and all on the main floor. 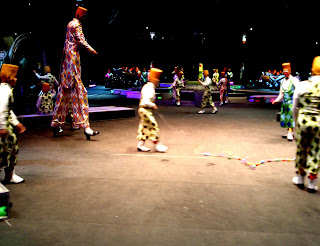 The man who had known about this "surprise" took our picture. I snapped pictures on all sides as I tried to see everyting - up close.
T 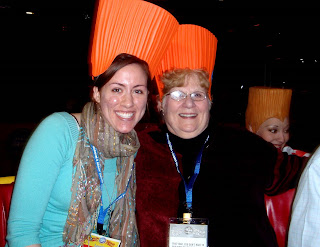 It was a moment. 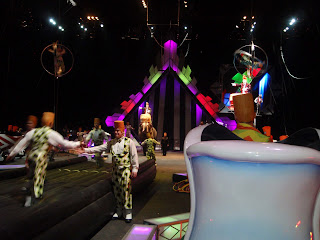 It was quite a morning. The show started at 10:30 and ended at 1 pm. And every minute was FUN! Pure entertainment. 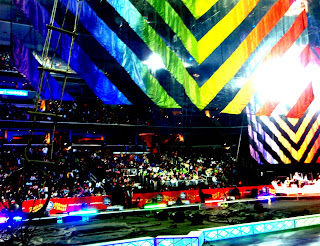 I was looking to add some touches to my circus story. I would say I more than got that wish.