Several days ago a story started trying to birth itself.

I am experiencing a barrage of memories.  After posting twice on Facebook about it I know I need to capture them so for the time-being I will combine them here. And capture/add anything that comes later.
Until I know what's happening  - if anything. 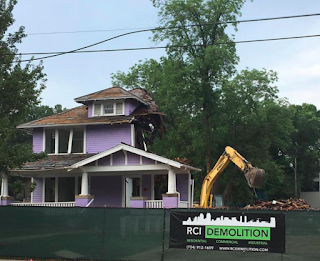 My cousin sent me a "message" today with this picture and it unleashed a flood of memories from my childhood. The address of this house is1942 E. 7th Street, Charlotte, NC.

My grandmother lived at 2308... their house was one of the first built in Elizabeth. I grew up in that neighborhood...A corner house  - 2201 - was once our house. Then 8th street. Once we lived on 9th street in a darling house where I remember a good Christmas from Santa and Pearl Harbor - the beginning of war. I hope it is still there. Mama and Daddy moved frequently and always in the Elizabeth Section - close to my grandmother. Seeing the picture of that house brought back a deluge of memories.

It was a mega prompt. I sat down and began dictating into the Dragon App. on my iPhone so I can catch the images and the memories. Its a rich gift that is sending me I off into the long ago of my own story.

The sad note - once houses are broken up they have taken down the stories as well. Even though this house is not one I ever lived in it is familiar and reminds me of the look of 7th Street. Glad Louise Lowry Barr

When all the memories began to flow  earlier today I was sitting out a heavy rainstorm in the parking lot of Chevy Chase Supermarket. Rather than waste the time or/and lose the train of thought filled with childhood memories I dictated them in the Dragon App on my phone. I am keeping these in Evernote.

Train Memories - The Elizabeth Section - was developed around a train line and crossing - so the sound of soulful whistles was the Musak of my childhood but I did not realize it as that until 45 years later when Jim and I spent a week-end in a B and B off Seventh Street and I heard that music again during all hours of the night and day.

Checking Memories - When you are 81 years old who do you call to fact-check your memories? But better to capture the stories now than never.

The White Cliffs of Dover - The houses I on 7th street had wide porches and we played on them in the hot summer and on rainy days. Or anytime we wanted to "put on a show".  A neighbor lady loved hearing me, at age 6, sing The White Cliffs of Dover and she took me downtown to audition for a local radio talent show. It was held at the Visualite Movie Theater. I was selected and the Saturday morning I faced a large audience for the first time I was shaking and scared. The announcer said, "Go ahead, Ellouise."I took a deep breath and sang. I had forgotten all about that morning but when I remembered it the other day I could hear the sound of the applause.

Have to keep thinking about those days in the Elizabeth Section - and Granny and others.

My children or grandchildren have never lived in a house with a porch.

Winds are tossing the flags. The middle flag is Maryland. I feel a bit tossed myself by waves of memories. Coming down Hwy 5 S took me right by Andrews AFB where Jim was stationed for four years. Our kids were youngsters, our youngest child died in the hospital there, two others swam on the base swim team, several summers I was a Scout leader at a near-by Girl Scout Camp - Camp Winona-- and we rode down Hwy 5 every day for a few weeks...I don't remember the camp songs we sang in the car back and forth but Karen does. Reminded of the historic sites near here.. Surratts House and Doctor Mudd's Home where they took Booth after Lincoln was killed. Definitely coming back to go through those. Maybe I can get son Jim to come down too so that he can use his US Army pass to get on base st Andrews. Would love that. Maybe there is a story here? And then just a bit further down the road is the Union Prison where my great grandfather- a 16 year old boy - was held- after Petersburg. I don't know much about him or his story. And have always wondered if he walked home to NC.


Writer's Note: One of the special benefits when you have a show in the Fringe is that they are all reviewed. My first performance, July 6, reviewers from The Washington Post and DCMetroTheaterArts were in the audience and their opinions were published on July 7. Because the review of Ready to Serve was in a write up with two other shows - I have separated the Ready to Serve article for my blog - and for sharing.
See the full article HERE. 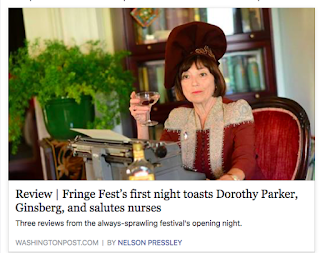 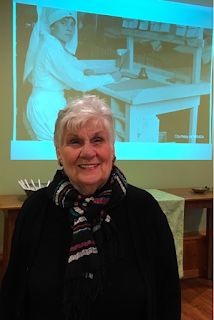 “Ready to Serve: Remember the Nurses”
First came the sound of the ambulances rolling up to the hospital entrance. Then, the shouted alert to medical staff: “Gas! Gas! Gas!” It was a heads-up that the ambulances had brought victims of a gas attack on a World War I battlefield. The nurses would see the soldiers shuffle into the hospital, coughing, with bandaged eyes, each man holding on to the shoulder of the man in front in a kind of macabre conga line.

Those images are among the vivid details that surge up from “Ready to Serve: Remember the Nurses,” storyteller Ellouise Schoettler’s solo piece about Maryland nurses serving in France during World War I. Drawn from nurses’ letters and other documents, the 70-minute piece eschews performative polish: Dressed in contemporary garb, Schoettler talks casually, plopped on a stool, like a grandmotherly acquaintance recounting anecdotes over tea. But she has curated her material deftly, and the monologue is often moving and searingly specific.

Told in the first-person, through the eyes of a composite nurse character, “Ready to Serve” contains many scenes that are more upbeat or prosaic than the gas-attack sequence. The narrator recalls a pile of hand-addressed envelopes sent by nurses eager to volunteer; a dismaying first look at the bathrooms in the nurses’ residence in France (no shower curtains!); a hospital ward’s Christmas tree, festooned with ornaments that wounded soldiers had crafted from shiny candy wrappers. Through such glimpses comes a portrait of resourceful, mutually supportive, fiercely committed medical pros coping with harrowing circumstances they hadn’t foreseen.
“Ready to Serve” follows a previous World War I-themed show that Schoettler performed at the Capital Fringe Festival: “The Hello Girls,” about military switchboard operators. This newer piece gains added resonance from timing, arriving at the Fringe in the centenary year of America’s entry into the war.Sign up

July 6 Ready to Serve, the unknown story of 64 MD nurses who served in France during WWI, opens at Gallaudet University as part of the 2017 Capital Fringe.

Someone asked me "Why are you telling Ready to Serve again this year. You have been telling it across Maryland for six months - aren't you tired of it?"

"No." This will be my eighth consecutive year performing in the Capital Fringe for audiences of all ages who are terrific listeners which is vital for a storyteller. And, I love this story and the more I tell it the more I care about these women who stepped up when they were needed and then were forgotten. 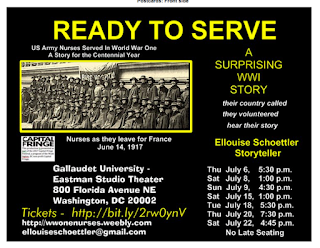 Ready to Serve is a true tale of 64 professional nurses, trained at Johns Hopkins School of Nursing, Baltimore, MD, who joined the Army to serve in France with Hopkins Base Hospital #18.

Yes. Ready to Serve was premiered at the 2016 Capital Fringe last June.  I am bringing it back to the Fringe after a year of touring the show in Maryland.  June 14 their story turned 100 years old as that is the date they “shipped out” in 1917 from New York on the USS Finland .

From the day I started the research for Ready to Serve I have been determined to give these women a voice to tell their story… and to bring them out of the shadows of history during the WWI Centennial and that is NOW. The Centennial began April 6.
Ready to Serve is a one-woman show drawn from letters these nurses wrote home. Their letters are filled with reports of brutal winter weather, spartan living quarters which they called “our ridiculous plight”, and the sisterhood of French nurses who prepared them for the battle wounds that would come into their care at Base Hospital #18. “You can do it.” They told them. “if you know what to expect.”

Mostly they write home about the courage, strength, and patriotism of the men they are tending. 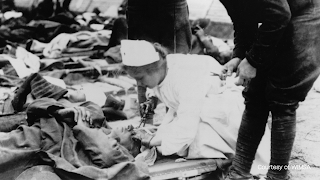 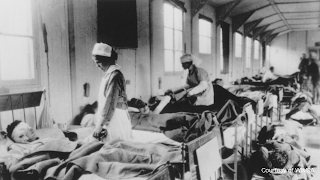 The winters of 1917 and 1918 were punishing. Two of the nurses died and five were sent home because of the weather. The numbers of casualties from major battles were a test of their stamina but they did their best work through all the hardships. Yet their stories remained unknown.  Ready to Serve shines a light on them and their work.

“I may forget the names of those boys ,” wrote one nurse, “but I will remember the faces of those brave lads forever.” I hope this story will help people remember the nurses!www.wwonesnurses.weebly.com

As I will remember my opportunity to share this story.
The year of telling their story to varied audiences at different venues across the state has been a wonderful journey. By telling the story many times to different audiences I feel closer to the nurses and can bring more life to their story. And, I know Maryland better as I drive the back roads and highways.

The people who attend Ready to Serve are interested in the war and the story. Many are well schooled in the history; others want to know more about the Great War a hundred years ago. They are surprised by the women’s experiences, saying, “I never knew about that. I never heard of that.” There is sadness in their faces when they hear of the deaths of the doughboys from battle wounds and the nurses and corpsmen who died from diseases not bullets or bombs.

When I describe the battle wounds they wrote home about we have a  glimpse of the reality of the war for the soldiers and for the nurses who saw it and experienced working with them, especially of the cost to men suffering after a gas attack. I have seen tears in many eyes.  I often choke myself when telling of some incidents that I know quite well.
‘’ How do they do it,” a nurse asked to no one in particular in a letter she wrote to her family in 1918. “They take their "cup of courage", someone blows a whistle, they climb the ladder against the trench wall and then over into the battle. If they are lucky they are brought to us.”

During the Q and A audience members share WWl stories from their families, some bring scrap books to share and nurses come to hear their “sisters” remembered for their skills, kindness and courage.

While Ready to Serve focuses on Hopkins nurses the story is intended to honor all the nurses who served overseas.

As a spoken–word–artist, my joy is seeking stories of unknown women and bringing them to life.