Technology Gets Me Through!


Monday night I was driving home from the Writer's Center where I am enjoying the Veterans Writing Project class on writing memoir and non fiction when - - my radio went silent and unreponsive. OMG!!!

I ride through life listening to SiriusXM Radio Fifities on 5 -  sailing on memories of those lovely days when Jim and I were young and in love and starting our life together.

When I am wrapped in that warmth I don't even notice my white hair and Jim is always beside me.

Within twelve hours I was sitting in the Toyota Dealer Service Department waiting room - trying not to think the "awfuls" that it might cost many bucks to replace the radio.

Well it was a good day - they diagnosed that the radio amplifiers were done - and covered under the warranty. As I breathed a deep sigh of relief and remembered the day I bought the extended warranty even though I hated to spend the money - okay I paidfor the amplifier - just not today.

Then the technician added: "it will take 7 to 10 days for the part to come from Toyota."

Yikes! Here was the bad news - for me. 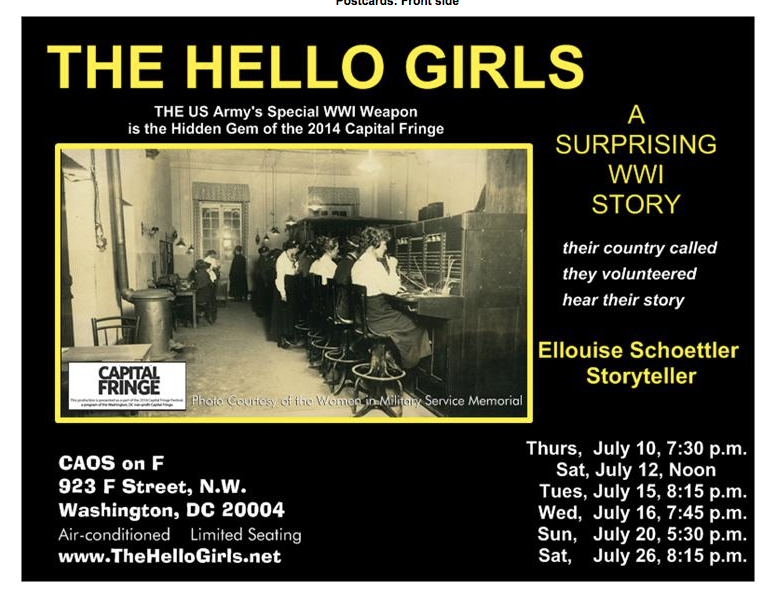 Monday I am on the road with The Hello Girls and, to tell you the truth, I cannot see myself making that trip without Buddy Holly and all the other great guys of the "days" and their music.


Last year I added the computer to my Sirius Radio account - - for NOW...
I think this will work out because I have a personal Hot Spot on my phone 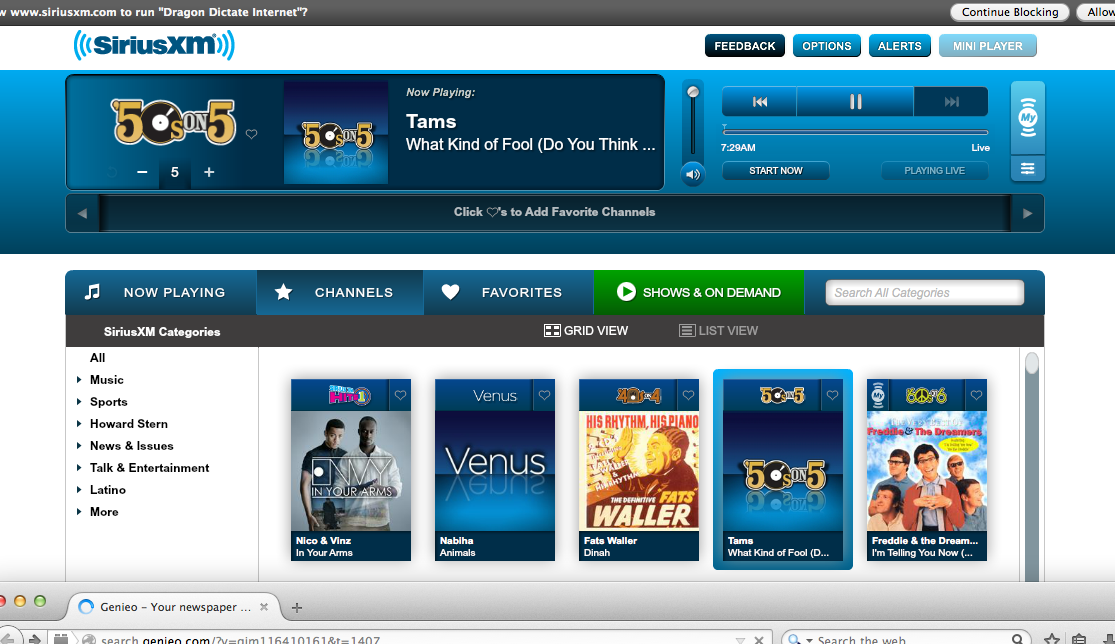 Monday I will be happily roaring up the highway toward Hagerstown, Maryland with my computer strapped safely into the seat next to me - 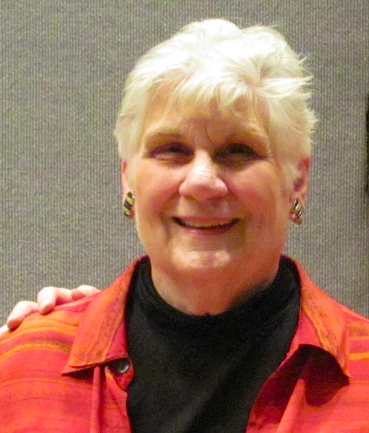 This is the plan. Some of the trip I listen to the Hello Girls tape on iTunes
but most important  - - the rest of the time - -

Fifties on 5 will be blaring those familiar tunes and keeping me company.


What this is really about -
is learning to take care of yourself and
going on about life
the best way you can!

Its my new normal.

For the next six weeks I am taking a Veterans Writing Project writing class focusing on Memoir and Creative Narrative.

The Class is an extension of the work of the VWP Seminar I attended recently. It is a very varied group of nine which makes it all the more interesting. I can't say I don't mind being the oldest in the class - but am coming to terms with it. It is what it is.

We met last week for an introduction to the class and each other and to set the rules and schedules for the remaining classes. Personally I like this kind of structure. Oh, did I mention homework assignments. We have those too.

The first homework assignment is reading a 1970s New York Magazine article by author Tom Wolfe. In it he describes his view of the evolution of a new form of journalism -  creative narrative. Wolfe started out in NYC as a journalist in the 1950s. He entered that world filled with ambition and dreams and he was surrounded by many of the "names" of the day who would achieve their dreams of writing "the novel".  Through their work they developed a new style of writing for journalists - a style that changed the way reporters often write and that also impacted on the sacred forms of novel-writing.

I see it as the form we are accustomed to today - reporting as story. The presence of the reporter in the the articles as more that just the narrator voice.

I have read and enjoyed the work of Tom Wolfe for years and I particularly remember the surprises in reading Truman Capote's "In Cold Blood" - a novel written in the creative narrative style - published in 1966. In the 48 years since then the style has become a familiar norm.

Last night I was reading a 1995 work, Peterson's "The Hot Zone", which details an earlier Ebola epidemic and reads like a can't-put-it-down-spy-thriller. Non-fiction written as fiction - i.e. creative narrative. The person who recommended the book told me, "this will scare the shit out of you." That's right on target - but more than that - it demonstrates this week's homework for my class.

Creative narrative is so familiar to readers today that I was unaware it is the form I use to develop and tell my stories - especially the personal stories I think of as oral memoir.

So the class is not only leading me to write new pieces it is prompting me to review and revise oral stories and put those words on paper. To help that along I am trying a few new ways of approaching both my writing, my storytelling - - and my blog writing. 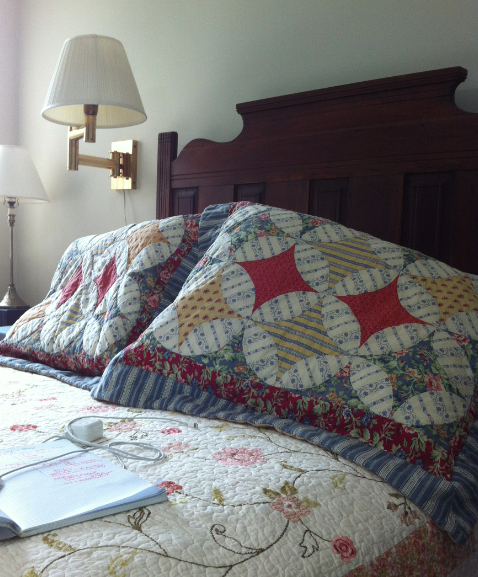 This morning I woke up warm and cozy as I cuddled up next to pillows covered in the colorful quilted shams Jim and I used when Jim was in the bed with me. The pillow nesting is my solution for combatting the loneliness of waking up in an empty bed.

My iPhone alarm began blaring the notes of "by the sea" at 6 a.m. When I bought my new iPhone 5s recently I changed the alarm sound from the lively beats of a "marimba" to the first bars of a tune that sounds like a dated British movie. Hearing it reminds me of waking up to the Arvin clock-radio Jim and I had when were first married another life-time ago. News or music opened every day before the irritating buzzer took over shattering sleep and forcing us out of bed

This morning I snuggled deeper under the covers and didn't actually get up until 7:45. I know the time because before moving an inch I looked at Jim's watch that I wear on my left forearm. At first light every morning it reminds me he is not here.

When I swung my legs over the side of my tall Texas farm bed I thought  " We have milk. I can have cereal for breakfast." I don' t usually get up thinking about what's in the refrigerator but we ran out of milk a few days ago and it was still on my mind.

I prefer easy breakfasts out of a cereal box rather than cooking eggs or toasting an English muffin. My daughter Karen bought some milk last evening on her way home from a round of necessary errands. You understand, we had money to buy milk when it ran out -  we just did not have a reason or the urge to go out on rainy days to buy some.

The weather changed yesterday afternoon and the sun came back.

Have you ever noticed it is easier to do without something by choice than it is to do without it when your pockets are empty and you have to.
Posted by ELLOUISESTORY No comments:

Taking stock of the week.

It's Sunday - so playing catch-up - with last week and thinking about the week ahead.

I have had quite a week and now I am standing on the cusp of another one that also has challenges and joys.

Last Sunday I was attending the second day of a two-day Veteran's Writers Project Seminar in Arlington, VA and feeling filled up with new information and ideas. The rest of the week I did "life" and prepared for a a wonderful storytelling gig in Georgetown, DE where I told "Your Story is Your Legacy" to an annual gathering of Delaware Librarians. They were a terrific audience - warm, welcoming and great listeners. Some mentioned the possiblility of bringing me back to their libraries and I do hope that happens - 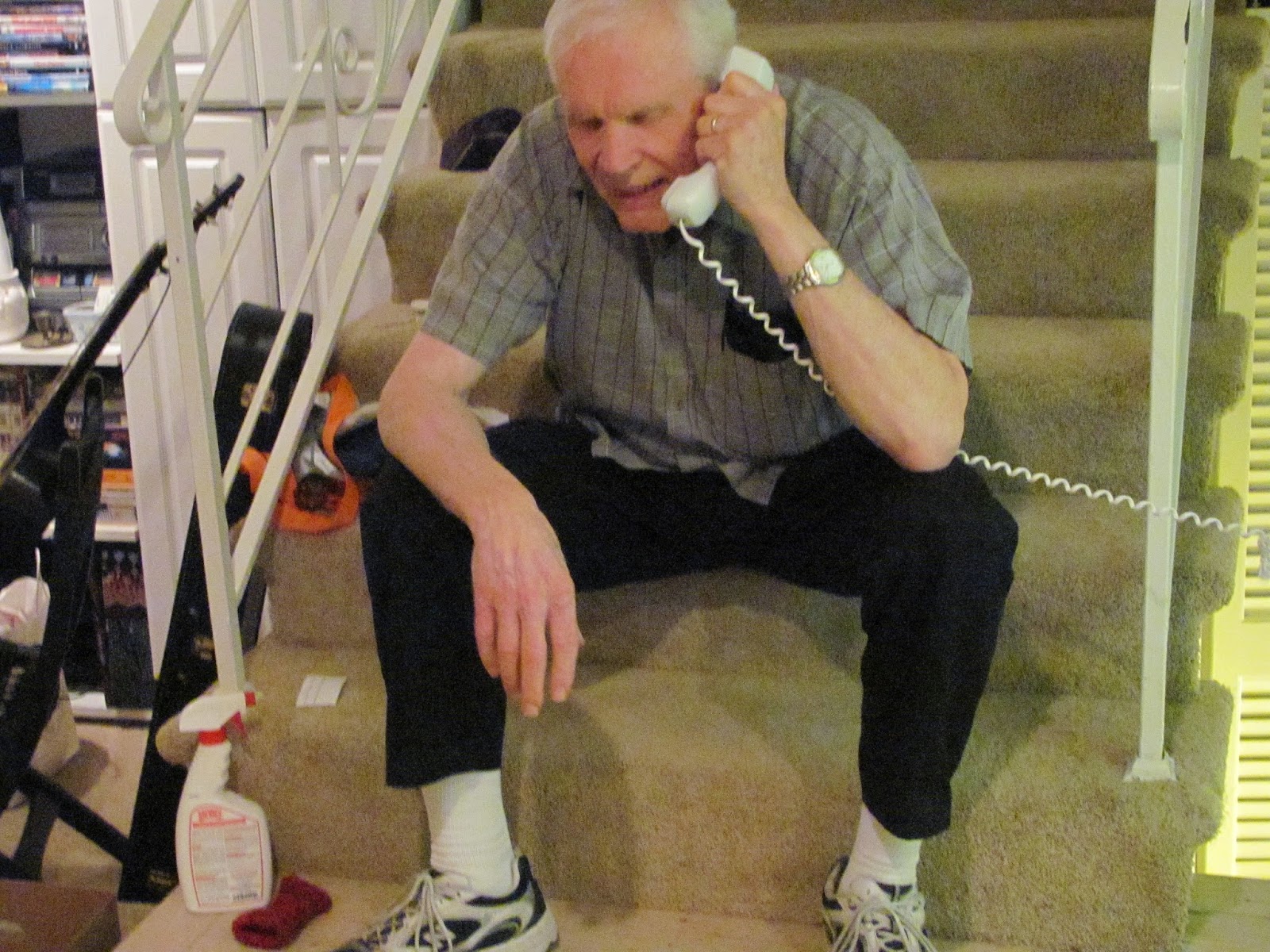 This week I have also had an advanced case of Apple-itis. I changed iPhones because after getting lost last week-end I decided I would be better off with an iPhone with a talkng Siri and GPS. WHAT WAS I THINKNG? There is quite a steep learning curve when you change your phone. My timing was off and I ended up cruising down HWY 50 Friday morning with no-phone and a silent GPS. So I drove on clutching the MapQuest print-out. My advice - if your are going to need help to get started with a new phone - consult your calendar and make sure all the stars are aligned before you give up your familiar phone.


Then my hard drive crashed on my MAC. Yikes.
They replaced the hard dive under warranty, thank goodness, but said that if I wanted them to transfer it to the new drive I would have to pay $100.  I decided to save the money and try to do it myself. It did not sound like rocket science. The genius told me the step by step way. I am jubilant! I unleashed the power of the MAC perfectly. One for my team. But, the Bluetooth in the car is still not working right.

My problem is that I so wish I could call Jim and tell him about the things that have happened and  bring him in on what's coming up this week. Haven't worked that out yet. Its gonna take more to work that out than connecting the Blue Tooth in my car.


My sister Kathy is arriving from Georgia on Tuesday for a week. There will be lots of talking, computer time, some TV and some special Field Trips in Washington. Kathy is also interested in the World War One period so its pretty sure that we will be visiting some sites. Kathy loves games so my daughter Karen picked up several new games to try out with her.

Tomorrow storyteller Jane Dorfman is the Guest on Stories in Focus and I am looking forward to our conversation and to hearing a new story from her.

Wednesday night I am receiving an award from the MC Business and Professional Women. 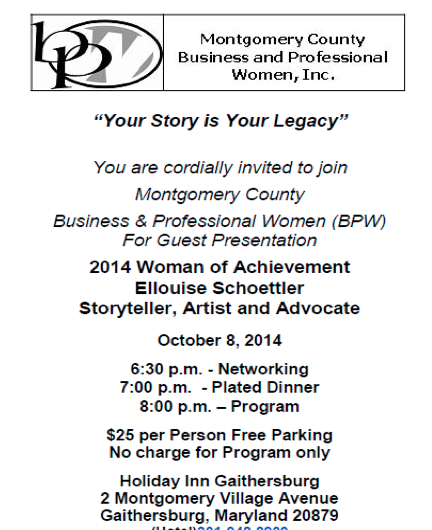 They have asked that I tall a story a part of the program. Makes me happy - so I am telling a version of "Your Story is Your Legacy" that will be tailored to them.

BPW is an organization with a long and distinguished history of supporting women in their work and in their education. The organization has a special significane to me as one of their national legends, Mariwyn Heath, from Dayton, Ohio was my mentor when I worked as ERA Campaign Director for the League of Women Voters of the US. She was smart, politically savvy, funny and a great cook.

She believed you had to have something to relieve the stress in all-consuming jobs like we had. On a trip to New York City to the Democratic National Convention Mariwyn taught me something really grand - how to needle-point. 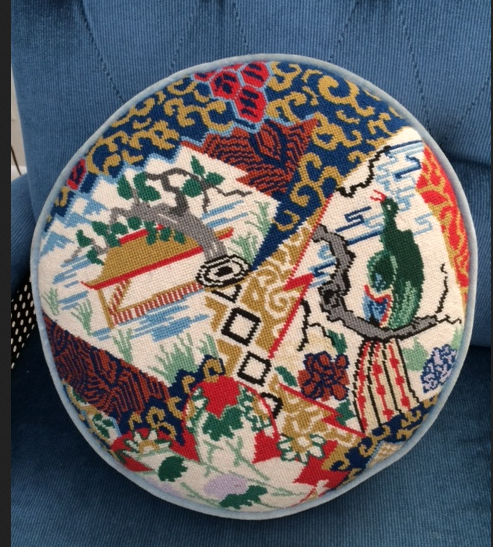 Quickly I embraced needle-pointing. I liked the feel of the colorful wool and the punch as I pushed a needle through the form. It was  soothing, especially on long flights and during interminable meetings. After making several small pieces (eye-glass cases) I tackled a pillow top. I was quite proud to give Jim this pillow for his birthday I in 1981. He was surprised and pleased and kept it on a chair in his office until he died.

Now it is a "familiar" in the living room and I think of both Jim and Mariwyn - who showed me how to make it. Just writing this lets me pricks memories and I know it would be a good thing for me to take out several half-finished lingering needlepoint projects and complete them. Tie up those loops.

Oh, yes, next Wednesday I will be grateful to receive the award and I will be thinking of and thanking Mariwyn Heath.

As I send hugs to Jim.