When Marybeth Evans, Director of the Starburst Storytelling Festival in Anderson,SC, invited me to tell The Hello Girls and to present my Flesh on Old Bones Workshop as a start-up for a community story search they are initiating, I was excited and delighted. In my experience when you ask a group to share their family stories you are in for a treat and surprises. Now I am home and winding up the paperwork that always follows a road-trip. I am thinking about last week and mulling over what happened - all good. But - I realized there was something missing. I did not have time to share this story. Because the message is so important I am sending it now. The young Pouli in this story is the KEY actor because he asks a question - something we all have to do if we are hope to find the stories in our families. The Cowtail Switc As the sun was fading in the sky over the Greenville Spartanburg Airport last evening I was waiting to board this plane to fly home to Dulles Airport.

This is not my favorite air plane. I had not read the fine print on my reservation in time to make changes. So  - - having ridden one of these  - the 3 - 800 Haviland DASH - from Tri-Cities TN in September I knew how it could roar and toss and turn - no way does it ever DASH.  It pokes along. I was nervous - oh, truth - I was scared. So - preparing for the worst -  I took one half of a small pill to help with that.

And the Lord provided.

Turned out my seat mate was a clean-cut, red head with a crew cut - a grad student at Clemson University - who took one look at the propellors outside our window, which he was sitting next to - turned to me and said, - "I don't like this". I agreed, " I don't either." And that opened our two hour conversation. We began to talk and we talked and talked and talked. And best of all we laughed. We laughed all the way to Dulles Airport outside Washington, D.C.

I learned about why he came to Clemson from up North, and how he liked living in the South and more and more and more. And he was curious about storytelling and a grand-mother traveling from home to tell stories. We told stories to each other and at one point when the plane jumped - we found out that we had both laughed out loud at the Louis C.K. comedy routine about flying - "what's the matter with you people, you are sitting in a chair in the sky?"

The time sped by - slower than ususal on a plane, that's true - and louder - but, hey. it had turned into fun.

Before we landed, he took out his phone. "we have to take a selfie." And he did.
He caught the moment.

He has my email and I hope to see it after his partying is done this week-end.

The nightmare I expected had flipped into - not a DASH - but a good ride home. 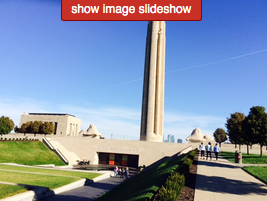 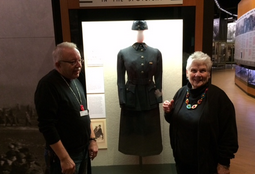 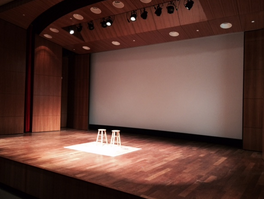 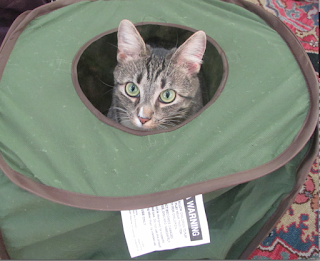 When I walked into the house Monday afternoon after 4 days away in Kansas City the cat checked me over before coming close. How do I tell her that I am lashed to the computer all day and tomorrow preparing to take off again on Sunday - this time The Hello Girls and I are going to Anderson, SC.  Looking forward to being there where I can pop in and order sweet tea and grits anytime I want them and they will be there waiting for me.

Also happy to be presenting The Flesh on Old Bones workshop which shows people how to use genealogy techniques to find and enrich their stories.  I love it. Spent all day tracking down a woman who went to France during WWI, who is from Anderson, SC and who I think may be a character in a story I am working on. Went onto Ancestry. com and got lost - - but came back with a wealth of material that just maybe the steak of a new story. This kind of research and finding stories is what opened the way to storytelling for me some twenty plus years ago - - - I still love playing at being Nancy Drew, especially when the puzzle pieces are fitting together.

Now on to the laundry or I won't even be going to the grocery store.
Posted by ELLOUISESTORY No comments:

The Hello Girls at National World War One Museum October 11 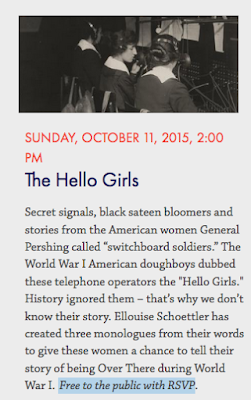 October 11 - The Hello Girls at the National World War One Museum in Kamsas City, MO.

Free to the public - but RSVP required.
HERE

If you want to know more about the program
go to my website
Posted by ELLOUISESTORY 2 comments: