Twenty years ago I called my aunt Catherine asking if she knew a family ghost story.  “Well, Ellouise, when I was a youngster they told me Granny Cobb said she saw Walter standing at the foot of her bed in the Cobb home on Church Street. She said he saluted, waved a last good-bye and disappeared.”   "Who is Walter?" I had never heard about him.

What's his story?
I kept wondering and looking for information.

In 1930, 12 years after John Walter died from Spanish Flu in Camp Hospital 13 in France, Mary Louise Cobb, John Walter’s mother, traveled from Charlotte across the Atlantic on a ship with a large group of Gold Star widows and mothers, who bravely went to France to say good-bye to their loved ones.

87 years later, September 2, 2017, I stood beside John Walter’s grave in San Mihiel American Cemetery in France with my daughter Karen and son Jim.

It was beautiful there and in the quiet of the cemetery we realized how forgotten Walter is.

We were approaching the 100th anniversary of his death. We knew it was time to bring something of him home to Charlotte - - to the next generations of his family.

We are remembering John Walter and his mother by placing a Centopath memorial stone on the Cobb Plot in Elmwood Cemetary, Charlotte, NC. and I am telling their story. 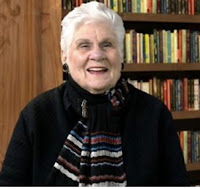 About the storyteller Ellouise Schoettler:
Born and raised in Charlotte, now based in MD, she tells original stories nationwide, Since 1914 Ellouise has developed and told stories of the Great War which feature women.
“In Remembrance” is told from the perspective of John Walter’s mother who went to France alone to visit her son’s grave in 1930 on a Gold Star Mother’s pilgrimage.
More information: www.ellouiseschoettler.com
A variety of WWI memorabilia will also be on display during this special evening.