For more than five years I have been telling an evening of stories at Friendship Heights Village Community Center, Chevy Chase, MD. Anne O'Neill, who directs the programs, and I had often talked about having a larger storytelling presence at Friendship. About eight months ago we decided to make that happen with Friendships sponsoring a monthly storytelling series which I would plan and produce. We launched Tales from the Village last night. And it was a grand evening.
So now - Tales in the Village, the 3rd Wednesday, every month, 7:30 PM. 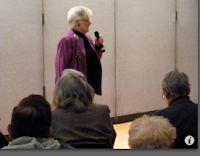 The opening evening featured storytellers Noa Baum, Linda Fang and me in a program we called, Cross Currents.


Very exciting and satisfying to welcome the audience. The room was filled with smiling folks looking forward to the stories. Half the assembled people indicated they were hearing stories for adults for the first time.


Noa Baum was the first storyteller. She delighted the audience with the story of her name - as told to her by her Israeli mother at their home in Israel.
Noa is an enthusiastic and energetic teller and she brought the audience into her tale with gestures and language. 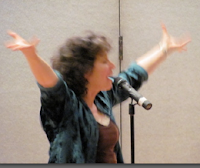 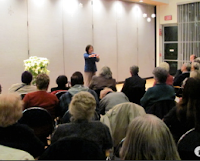 Linda Fang followed with a  lovely story of her childhood in Shanghai.
You have probably guessed that we were telling personal stories from our different cultures  - Israeli, Chinese and American.
Lynda closed her set with a short Chinese domestic fable. Very nice. 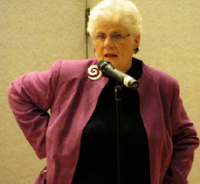 I chose to tell "Swimming" a family story which connects Jim, me, our children and grandchildren through our love - or not - of the water. 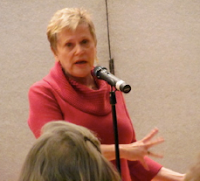 Moira Dockerty closed the evening at the Open Mic with a short story about how a son with "attitude" can really ruffle a mother's feathers.
Always great to wind-up with a good laugh.

Received this comment in an email from a woman (I don't know her) who came that evening and kindly wrote to me afterwards. I am so delighted by her words that I just have to share it -

Thanks again.
You were super! I can feel the diving board, the metal ladder and see the lake
your grandson fell into -- still!
Enjoyed the evening tremendously.

(Hint! Hint! We storytellers love to hear listeners reactions to our stories.)