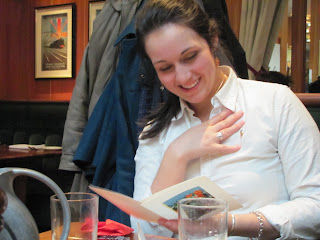 When I thought about a gift for her I decided to pass along something I have kept in my treasure box since the 1950s.

In 1953 I bought this vintage rhinestone barrette at Ivey's Department Store in Charlotte, NC.  I have kept it - long after I cut my hair and had no need for a sparkling barrette - - not because it has a dollar value but because it is loaded with sentimental value for me. 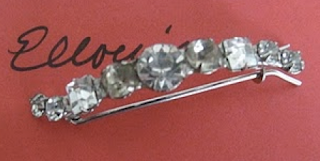 It carries memories. It has a story.

1953 Junior Senior Prom at Central High School
My first prom. I was very excited. Happy to be going with my steady boyfriend. The dance was held in the cavernous Armory - decorated for the occasion and there was a "live" band. Every couple eventually made it to this photo set-up
to record the evening.
Try as I will, I cannot recall the color of that net evening dress.

You can see that I am wearing my barrette - and a small rhinestone necklace.
Also - look at those strap marks - which remind me that
the week-end before the prom - had been the annual class trips to Myrtle Beach, SC. All the high schools in the area at some time or other made that trek every Spring.


I also remember wearing my barette to the rehearsal party the night before Jim and I got married.

Jim and I had joined Alison and her family for lunch at Clyde's to celebrate her birthday before she returned to college after her winter break. It was the moment to exchange gifts. I had written the story in a card and added the photos from the prom. She passed it around the table. I was sitting next to my son.


"Mom, that's really a nice gift." He waited a few minutes then asked, "was it hard to give it up?"

"Yes, it was. I took pictures of it before wrapping it.

I really think these kinds of "re-gifts" are the best! What did Alison say when she read the story?