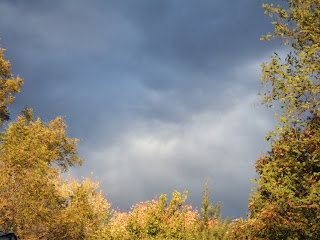 The rain stopped, the skies cleared and the sun came out for a little while today.
Not complaining about rain - we need it so badly. But there were times today when it felt like the world was weeping.

This was a day of emotional contrasts, gratitude and sadness.

Jim and I started the day with an early Mass - to pray for all the doctors, nurses, and anyone else who will be inolved with surgery for a dear friend of ours tomorrow. Lord please help them to be at their very best.

Some years ago Jim had some serious surgery and during it a clamp slipped from one end of his aorta. He came very close to bleeding to death. Later as the surgeon told me how brilliantly he had saved the situation - I could not help telling him that he might not have known it but he had a lot of help - prayers from many that he would be at his best.

This was the morning for my monthly visit to a local pre-school. The kids are delightful and they welcome me. " Did you bring stories?" Now I ask you, how good is that. Even though it was a rainy day I included stories which featured the sun, Rooster Calls the Sun and Grandmother Spider Brings the Light because they are both very participatory - just right for energetic kids who had been inside for a week of raiiny days.

In the afternoon my monthly visit with elders at a retirement community was scheduled. Since it is close to Thanksgiving I included several folktales about friendship and sharing, The Pumpkin Seed Bird and The Friendship Garden. Talking about the stories prompted them to tell stories about friends they remembered from their childhoods. One 90 plus year old woman spoke up, "I want to tell you about my Grandmother" - and her lovely memory of a woman who had loved her unconditionally and encouraged her was as fresh and vivid as when she was the child sitting on her grandmother's lap. Lovely! Days like this, when I am telling stories across generations, are a gift and I am grateful for them.

The sun came out as I was driving home. The foliage was glowing. I saw a tall tree with red leaves that looked as though they were on fire - shimmering in the sunlight. One of those sights that makes your heart sing.

That singing feeling was still with me when I walked into the house. Jim greeted me with " there's terrible news". The mother of our grand-daughter's good and close friend - a woman in her mid-forties, died suddenly last night. The news was now circulating.

She was a woman filled with life and vitality, wit and humor, love and friendship.
A wife and mother, daughter, and sister in a large family. Such a loss. So much sadness to follow.


I am grateful to have met her and known her a little and I am especially grateful that our grand-daughter had this woman as a friend. Right now her pain is too great to think of the gifts or feel the gratitude - its all about shock and grief and missing.
Posted by ELLOUISESTORY