Did you think I had forgotten about Gus Keasler?

Before I could write about him I had to un-earth and scan the photos. I am still hunting for others but I have decided to write about him a bit at a time, out of chronological sequence, rather than waiting until I have all the stuff together.

Making a story from bits of genealogy info is like pieceing a quilt. This is a work in progress. I will be adding to this post - tweaking the story, adding pictures and and editing for the next few days. Let's start with the usual genealogical data:

Gus Keaser was born March 2, 1885 in Pendleton County, South Carolina. He was the fourth of nine children. His parents were John Henry Keasler and Narcissus Howard Keasler. His mother died in 1900 when Gus was 15 years old.

John Henry married Lettice Smith in 1902 and Annie Laura was born in 1903. John Henry died in 1940. I have a four year old's vague memory of sitting in the church at his funeral with Granny and Mama.

There are no early pictures of Gus and we know little about his early life. He was schooled because in 1903 he entered the near-by Clemson College (now Clemson University) in Anderson, SC. He was a tall, strapping farm boy and so he was a natural for a football scholarship. Football and the scholarship may have been the only way he could have gone to college. I recall hearing - either from his brother that I knew as Uncle Bud or from Annie Laura - that as a farm family they "always had food to eat and a place to sleep but rarely heard the clink of coins in our pockets."

In 1989 I went to Sandy Springs, SC to meet and visit Gus' youngest sister, Annie Laura Keasler Moore, the last surviving sibling and and a staunch Clemson footbal fan. Annie was born the year Gus entered Clemson and she had clear memories of her "big brother Gus and of my mother as a young child when Granny brought Mama to visit the family after Gus died.

Annie drove Jim and me through Sandy Springs to see the old Keasler home and to near-by Clemson, SC to see the Clemson campus. She pointed out a hollowed clearing, "they have a big stadium now but that's where your granddaddy played football. In those days it was a rougher game even than it is today. They wore little leather helmets and they didn't have all the padding like today." (That was the first time anyone had talked to me about Gus as my Granddaddy and the first time I had thought about him as a real boy - not just the lionized football hero in the uniform-picture in a little gold frame on Granny's living room table - not just as "your mama's daddy".)
> 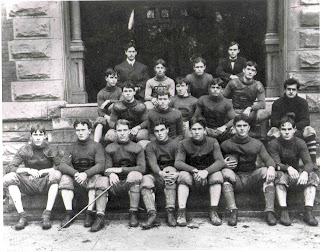 Gus was 19 years old when he enrolled at Clemson in 1904. The details I have now about his sports career at Clemson came to me from Sam Blackman, Jr - a grandson of Gus' sister Loucinda.Sam is part of the sports communications staff at Clemson.

Gus was on the 1904 and 1905 Clemson football teams. In 1905 he was named by one newspaper sports writer as one of his "picks" for an "all-southern" college team. And we know that Gus was part of a pick-up team coached by the illustrious Coach Heisman - a team which was a pre-cursor for the later Orange Bowl teams.

Annie told me that the boys who played in that game for Heisman were paid $50 each and because of that they lost their amateur standing and Gus lost his Clemson scholarship. 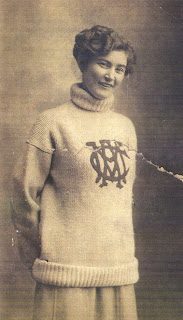 That explains why Granny is wearing the A and M letter sweater and why his worn brown leather covered college album which Mama had is the Accromeck, of A and M College, now known as North Carolina State University.
Posted by ELLOUISESTORY

Great story, but I must correct you on the location of Clemson. The present university and former college of which you spoke is located in Clemson, SC. Thomas Clemson willed his Fort Hill plantation located in Oconee county to the state. From that land the school and town grew up. I'm originally from Pendleton which is in Anderson County and moved to Anderson in 5th grade.

I loved reading about your grandfather.

Thanks for the correction Betty.
Ellouise