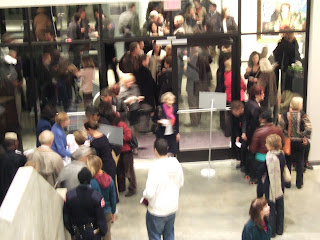 Crowds gathered at American University's Katzen Art Museum for the opening of Art Of Confrontation - an exhibition of three concurrent shows. We were interested in
Claiming Space: Some American Feminist Originators and Abu Graib, Painting by Fernando Botero.

Lucy Blankstein is standing next to a sculpture by Ray Van Santen which is in the Katzen collection. Later Lucy introduced me to Ray as we were standing in the Botero show. She and her husband had some very insightful comments about the paintings. 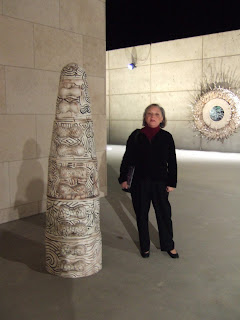 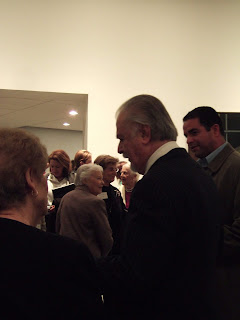 Artist Botero (the tall guy) was there and mobbed by admirers. The paintings were inspired by the shocking newspaper photographs of the prisoners in Abu Graib prison and the descriptions of what they endured. The images in the large paintings seem serene compared to the dynamic images of the drawings. The show is disturbing - worth seeing and thinking about.

Lucy and I went early and I was glad because it gave us a chance to talk with artist Miriam Schapiro and curators, Norma Broude and Mary Garrard. They selected a wonderful show and have written a fine catalog which accompanies the exhibition.

The works are choice. Among them is Miriam Schapiro's Anatomy of a Kimono, a monumental work from the 1970s. The work has not been seen in thiry years. Not been seen? That's right. It was purchased by a European collector and has been in a storage crate since it was shipped to Europe. 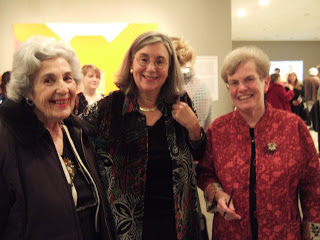 Seeing the works in the show is a trip down memory lane and I am very grateful for the opportunity to have another look at them.

Being at the show, however, was a disappointment. When these works were first shown the atmosphere of at an opening was charged, exciting - last night I over heard conversations which let me understand it was just another show to many of the gallery goers. They had no context for the work - ideologicaly, aesthetically or emotionally. They are just things. Curosities. Relics.

I guess that's what history does - it takes away the people, the involvement and the emotions. Leaving what - names, dates and explaining catalogs.

I left feeling a bit sad.