The Capital Fringe is coming closer and closer. My first performance is July 9.
I have the story, true - - but still I keep tweaking. Pulling out albums and papers. Bringing the history back to life for myself so that I can take the listeners there with me as I tell the story. 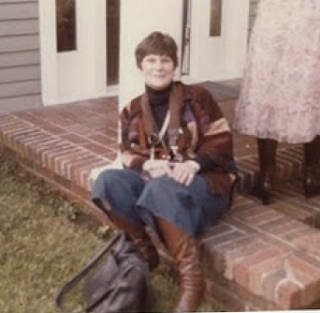 Old photographs
tell me stories.
They remind me of who I was then.
What it felt like to be that "me".
They give me back forgotten bits of personal history to go with the formal record.
Washington artist Nancy Cusick took this picture - 1977, International Women's Year Meeting, Houston, Texas. Nancy was representing the Washington Women's Arts Center and I was tagged for the Coalition of Women's Arts Organizations, the new political action group for women artists.
The artist group was small - about thirty - from California, Arizona, New York, Washington,DC, Texas, Virginia and other places I do not recall. Charlotte Robinson, DC and Virginia, and I organized the Women's Artspace which was the official site allotted to Artists by the IWY Commission. We did it without any money - - and it would not have happened at all except
that the State Department allowed me access to an office WATTS line - a free telephone - for weeks beforehand. I used that phone every day to connect with women artists across the country - and finally to make the call to borrow a movie projector from the Houston Library.
That movie projector proved to be a key element. Arizona artist Muriel Magenta brought her movie, "The Bride" - word of it spread and women crowded into our small curtained space to review the film. It was a hit - a point of conversation - and showed folks how artists can make a difference.
Four days of standing, walking and talking.
Women artists were a part of this gathering of women from across the country who were there to push for equal rights for women.
In addition to following the over-all agenda we gathered ideas, shared stories, and talked strategies - about women artists and how we could work toward achieving more successful careers in the male-favoring art world.

During the days of the IWY meeting the Houston women artists opened their hearts and homes to those of us who came from out-of-town. The picture of me shows a moment at a casual outdoor reception when I finally dropped down to give my feet a rest.

During the conference I was one of a group of eight or more artists welcomed into a large private home - it was like a college sleep-over. We came and went at will. Only really saw each other or our hostess over coffee in the dining room or kitchen in the morning. We did take time for brief chats - getting to know women from other parts of the U.S.
I joined the group after all the beds were assigned. Our hostess magically produced a canvas camp- cot and there was enough space in the laundry room to set it up a private nook. She apologized. I was grateful - it felt good to me.
When I came home I wrote about the Houston Meeting for Washington Review of the Arts:
the women who were there, a bit of what happened, the networking etc. etc.
But no bits about sleeping next to the water heater, sitting up late with New York artists hearing about how they do business, or a side conversation with an older now iconic artist about the onset of her menopause. Or the comedy of packing 7 women like sardines into a small hatch-back for a ride through downtown Houston to find a restaurant.
It was a bonding.
Building a network to support what the Coalition of Women's Arts Organizations would do next.
The personal is political.