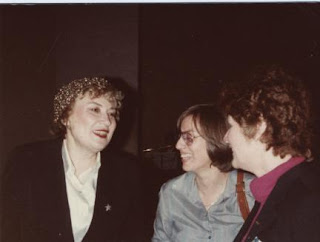 Do you remember this?
Boycott. That was one of the strategies to support ERA from 1979 to 1982.
Organizations were asked not to organize annual conventions and meetings in unratified states. Show the unratified states that there was an economic cost for not passing ERA.
In 1981 College Art Association was scheduled to have their annual meeting in New Orleans. Louisiana was an unratified state. The Women's Caucus for Art held their annual meeting in conjunction with CAA. CAA would not observe the boycott. Members of CAA were split over going ahead with their annual meeting.
WCA decided on a "Solomon-like" solution - two meetings. The first, the alternative for those supporting the boycott - was held in Washington, DC. The second was held along side the CAA meeting in New Orleans.
The Honorable Bella Abzug was invited to Washington to receive a special award from WCA.
Shown in the picture: Bella Abzug, Harriet Lyons, editor MS Magazine and Ellouise Schoettler.
Smaller, but spirited, the meeting was well-done and most important supported the ERA campaign.
Posted by ELLOUISESTORY