Hi -- it's Ellouise's daughter, Robin S. Fox, serving as Guest Blogger today since Ellouise is recuperating. I think Mom would have been happy if I'd just posted a picture so she wouldn't miss another day on her blog, but since she's probably sleeping as I write this, I'm hoping she'll forgive me for taking advantage of the situation, and actually writing something. And I hope you forgive me for it, too.
Ellouise -- Thanks & an Update
First -- Thanks to all who've sent such wonderful messages.
Here's the scoop: Mom had a surgical procedure yesterday -- scheduled. 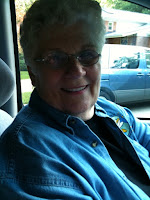 See how relaxed she looked on the way to the hospital? (This is the picture she sent me.)
The procedure went beautifully. Ask the surgeon -- even he said so. All is well and I'm guessing that Mom will be back playing with her new iPhone sometime later today. Certainly she'll be back posting here in a day or two. No way would she stay away longer. (I'm pretty sure she's packed her computer!)
Full recovery is expected quickly.
In the meantime, we don't want Ellouise to break her 2010 Video Friday record, right? So I'm posting the video she made Wednesday with that iPhone.

Washington Women's Art Center Memories
Claudia Vess, a Washington Area Artist and long time friend of Mom's, was at the house visiting so Mom showed her the new Second Wave Album Facebook Page. Have you taken a look at it? If not, please do.
Anyway, Claudia saw one of Kristina Edmondson's cartoons that had been published in the Washington Women's Art Center newsletter decades ago. And that prompted her own memory, which Mom immediately filmed:

A couple of early iPhone Lessons:

(1) It's easier to share the video directly from the iPhone than to download to your computer, upload to Vimeo as a QuickTime Video (where it might randomly land sideways!), have your daughter download it to her laptop, and then upload it onto Youtube. All because you deleted it from the iPhone as soon as it was uploaded to that first computer, eliminating the all important Do-Over Option. Gasp.
(2) Likely there are settings that will make it possible to avoid the whole black border issue. Or perhaps it was the way Ellouise held the phone. No matter -- it does the job.
Most important... a Reminder:
(3) There are more ways to share your story than joining Facebook.
Claudia isn't on Facebook. Are you? If you're not, you can still see the Second Wave Facebook Page, because it's public. What you miss, though, are other people's posts.
Bottom line: Facebook is about conversation and you can't join a conversation if you don't join the party and you can't hear the full converstion. Or can you?
What's Up with the Second Wave Album?
As I write this there are 83 "Fans" and the number seems to grow daily as word is spreading.
More exciting is that people are starting to speak up.
Here's a graph of the pages' Fan growth so far: 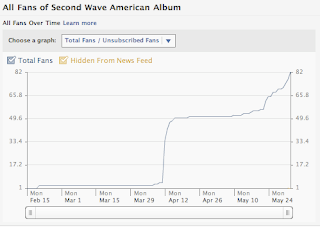 Keep in mind that, while we created the Page in February, we didn't publicize it until late March. Before then, it was just Mom and Me. Thinking. Tinkering. Imagining: What could happen on such a Facebook Page? Could Facebook help do what no publisher had done: Gather the stories of the ordinary women who'd embraced change so ardently? Grassroots stories.
What's the goal? I don't know. There were 100,000 who participated in the NOW March on Washington on July 9, 1978, to encourage an extension of the ERA ratification deadline. Each of those people has a different story about how they arrived to that day.
83 v. 100,000 -- seems like we're missing a few people.
And what about the ones who couldn't make it to the March? Or the ones who just want to know more about what was going on back then.
I'm embarassed to tell you that I didn't go that day. I was 18 years old. You would have thought Mom would have dragged my sister (then 19) and me. Fact: She did invite us to go. Several times.
Now that I have an 18 year old (son), I get it -- it's hard to MAKE them do anything they don't want to do. Hard to get them to understand what they might be missing. Managing Potential Regret isn't a big part of their equation. Yet.
Or maybe it's just a heredity thing. Were you a different kind of teen?
Likely, I spent that day lifeguarding at Connecticut Belair Pool, unaware of the significance of what was going on just a few miles away. A missed opportunity to witness history. Alas. I wonder now if it would have been a flashpoint in my life.
I'm feeling pretty lucky, though. I'm getting a second chance -- to notice not just history but the ways my mother participated in it. Looking at files, pictures. Listening to Mom's stories, and the stories of others. And I have the ability to ask more questions. It's all a luxury, and I know it.
Sharing without Facebook
Still, if you have a memory you want to share, there are other ways to do that than joining Facebook, including just telling your stories to Ellouise -- by phone, email or video! Or you can just write a comment on this post here. If you do, we can move it over to the Facebook Page to share with others. Just let us know that's okay with you.
The point is that that these 1970s memories are important to capture. They are shared history. So add yours, okay?
Thanks!

Thanks so much for a status report on Ellouise! I'd been thinking of her.

I (son, Jimmy) am here with Ellouise reading the post to her in the hospital. She loved it. Thanks, Robin.

BTW, I agree completely with Mom and Robin about the importance of capturing everyone's memories of the 1970s. My daughters benefit from the trail blazed by their grandmother and her friends and colleagues during that important time.

Robin, you did a fine job filling in. Glad to hear the surgery went well.--Jane D.

This is so cool. Love the guest blogger approach, and to knowing Ellouise's blog is being looked after so well.

As for me, Robin, I was a young mother and busy with home and such. I knew about the march in a half-fascinated, half-appalled way. What were they doing, those women? I was happy with my life and didn't see any need to change it...except...

I remembered being in high school and wanting to take an electricity class. Couldn't do it because I had to take shop first. Couldn't take shop because I was a girl; gorls took home ec. That bothered me (still does) and I began to see what the movement was about. Did I become active? No, but I was listening and thinking about what these women had to say.