NOTE: It's Robin S. Fox, Ellouise's daughter, still serving as Guest Blogger while Ellouise is recuperating
By Creative Memories standards, the album is stark. No stickers. No background designer papers. No stars. But the album my mother made for me as a high school graduation present in 1977 is jammed with dates and addresses and memories. Hand penned on archival paper.
Mine wasn't Mom's first album. In the mid-1970s, Ellouise took a class in Ruth Ward's attic with Josephine Withers where Ruth taught them how to work with photos. All three were members of the Washington Women's Art Center, and all three were interested in family origins.
"We had a blast," says Mom now.
Ellouise's first album positioned current day photos of everyday life like our family dinners with similar photos from her childhood.
"I used the photos to mark the passage of time," Mom said when I called to ask her about it earlier today. (NOTE: She's promised to write her own blog post about all this soon.) 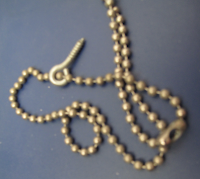 That album, and others (including mine) were later exhibited at the Washington Women's Art Center. In the 1970s, one of the thrusts in women's art was to declare personal material as appropriate subject for art. The albums were part of that effort.
Somewhere there is a picture of me at the WWAC, looking at the albums. But I can't find it. What I know is that Mom protected them. My album still has attached the chain she used to secure it the exhibit.
These albums began Ellouise's use of albums as art -- and story -- form.
The pictures in my album are all dry mounted on archival paper, thanks to those lessons from Ruth. They spread across the pages chronologically. Collectively, the pages in my album tell a story. My story. 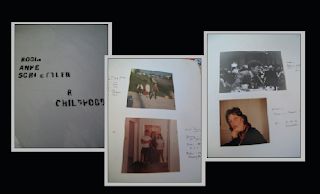 I was thinking about that album this week as I sat at my dining room table designing my graduating son's collaged "Memory Board" which will hang with all the rest of his friends' collages in a long hall as part of the all-night Grad Night event on Friday. A Campolindo High School tradition.
Thursday, the doors will open for the public walk-through of all the varied entertainment areas parents have been designing for months.
And I know -- people will linger at the Memory Boards. They always do. They're looking for familiar faces, curious about each of the graduating seniors. In some ways the collages are like Mom's first albums -- there's a similarity of pictures. Just different faces marking the same 18 years of time.
I've walked through the Memory Board exhibits many times over the years. I knew what most will be jammed with pictures. So I started to try to create one just like that. Meet expectations.
I wish I could tell you that I was lovingly making the Memory Board the way that my mother spent weeks making my album.
But the truth is that I was stressing. Let's just say that the combination of communication and technological snafus, combined with the failure of a crumpled up instructions page to make it out of my son's jeep, left the project already late and me, in distress.
At first, I sifted boxes and old albums and digital files. But then I stopped, pausing to look at my own album Mom gave me so many years before. And that's when I started to think about Jamie. My memories. The stories I told about him. The stories he told. The things that he still kept in his room.
Suddenly, all those others eyes-on-the-collage didn't matter.
The Memory Board could just tell a story. Jamie's Story. Pictures combined with mementos. So I moved away from the archives and pulled out my camera to take a few new shots. 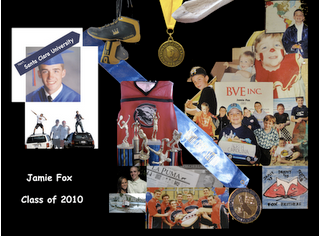 And the result got better. Less like a photo montage. More like an album.
Jamie's Story.
Told my way.
The way MY mother taught me.