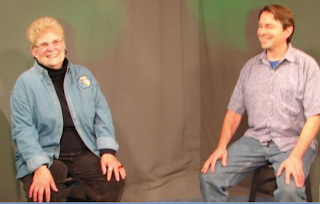 Warm-up photo before taping Stories in Focus this week. Guest Storyteller, Nick Newlin.
Can you tell we are having fun?

Well it just got better and better. A good interview and Nick told a new story, Squeezebox Love.
When I was Director of the Audubon Holiday Fair 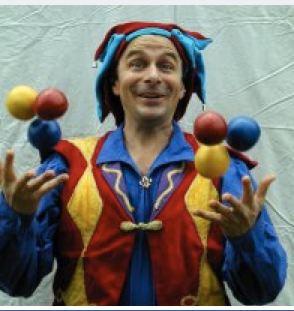 I hired Nick and his wife Joanne to perform as their popular act Nicolo Whimsey for the benefit pre-view party. They were a smashing success and added a special color and excitement to the event. He talks about his work as a juggler and Renaissance Fair performer during the interview - and also about his new books - The 30 Minute Shakespeare Plays - developed from his work as an artist-in-the-schools with Folger Shakespeare Theater. I reconnected with Nick several years ago at Speakeasydc where he was telling a story and then told with him last July. He is as easy and comfortable with storytelling as he is with his juggling.

Stories in Focus with Nick Newlin will air Wednesdays at 9pm for four weeks beginning tonight on Montgomery County local cable access station, Channel 16. In the near future I will post the program on Vimeo.com

Nick will be telling again in Kensington in July.
Posted by ELLOUISESTORY

I liked your video post today. It looks like you all have a great time doing what you do.