Monday - Travel in the Time of the Volcano 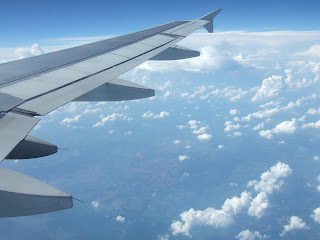 More about Flights and the Volcano

1. Our son Jim called. "My flight was cancelled. Not going to Russia today afterall." I was glad.

2. My friend Claudia called: " I am not going to Documenta. My 8PM flight tonight to Germany was cancelled." Another staycation caused by the shifting clouds of volcanic ash. She added, "I would rather be at home than worrying about how I am going to get home."

3. On the heels of that - I received a news article from my cousin about the high school musicians from Los Gatos, CA - stranded in Munich - hoping to get home any day. My cousin's daughter is among them. When the band was stranded at the airport they whipped out their instruments and entertained all the folks. A reporter picked up the story which has been featured on German and other EU tv stations.

check on my facebook, you'll see my updates of my daughter Marina. She went with the Los Gatos High Band and Color Guard on a trip to Italy. They left on April 8 and were to return on the 16th via Munich. They got to Munich on Friday and from her that they wouldn't be going anywhere! One day turned into two, and now it could be up to a week before they return. Luckily, Lufthansa put them up in a nice hotel, and now their waylayance (I just made that word up) has garnered local (and I think nat'n'l) media attn. Marina is loving Germany and it's turned into two European trips for the price of one! That girl…

Love you and … carry on
Sandra

Now that's a high school trip to remember. I would love to be there to hear all the stories, wouldn't you?
Posted by ELLOUISESTORY

Fantastic, Ellouise! Thanks for posting my (and Marina's) story. I am sure there will be many, many more stories to come from this amazing waylayance.