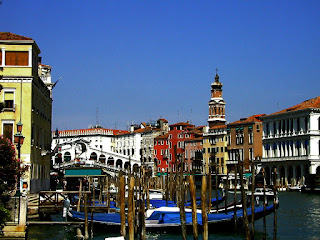 Envy is one of the deadly sins isn't it?

When friends told us today about their up-coming trip to Italy in May - Rome, Florence and Venice - I was glad for them - - but so sad we are not going back to Venice on an early plane. Do love that place!


When Jim and I were eating supper at the Mandarin Palace in Chevy Chase, DC I over-heard the woman at the next table speak up, " so what's been happening?"

Someone told me today that her partner was stranded in Vienna - airports closed because of the drifting volcanic ash. "She says she feels worried - trapped - because she can't get home." That brought back memories of the two weeks Jim and I were stranded in Provence after 9/11. It is very un-nerving when you can't come home. "Email her several times a day." I advised " I checked in at the internet centers in every town we rode through, hungry for reassurance that we were still connected." If you know anyone who is stuck anywhere right now - email them a hug.

Talk about off-timing - our son is flying to Moscow - yes, Russia - tomorrow for a business meeting. Rats! Fortunately he carries a Blackberry.

We have a sick cat at our house. Bill is old and his heart is failing but the medicines seem to be pepping him up. We can tell he is feeling better because he is once again leaping onto the kitchen counter and prowling his usual haunts. Crossing my fingers his nine lives have not run out.

Read on Facebook that our grandson will soon be a Bronco, Class of 2014. Interpretation: Ah, he has accepted the bid to Santa Clara University for next year! Excellent choice. Congratulations, Jamie.

This has been a party week-end. Yesterday I told our stories at a special birthday party. Today we attended a party to celebrate friends' large milestone because we are part of their story. A circle.

When I was reading a new curious cook-book yesterday I learned that the pig in Tom, Tom the Piper's son - was not a real pig - - it was gingerbread! Did you know that?
I feel so much better.

"what's been happening?" Just stuff! and I am so glad.
Posted by ELLOUISESTORY

That's why the saying, "the stuff of life" maybe? Oh wait, that's staff of life! But I like stuff better :-)

About the pig-why if it was gingerbread does the rhyme say "the pig was meat"? or did they mean "the pig was meet"? which doesn't make sense either. Is this revisionist nursery rhymes, perchance?

I thought the staff of life was bread.

And - isn't it - the pig was eat? That would leave room for it to be gingerbread.