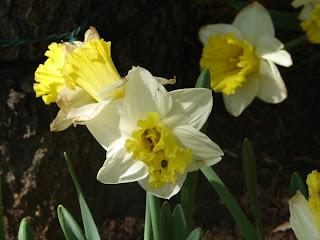 In the city
flowers blooming along the sidewalks
in a shopping area
are a welcome sight.

Storytelling Told stories for the final session of the Leadership Montgomery - Seniors 2010 Class Program. There was a very easy camaraderie within the group who had been together for more than six months. My session was to demo storytelling and provide tips for telling stories. These people are naturals. They were all articulate and comfortable talking. They enjoyed my stories and I enjoyed their responses and stories. A great time. 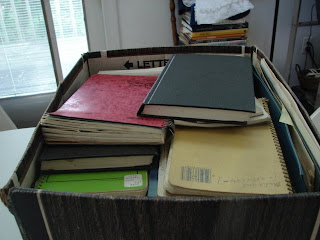 Posting pictures and captions that tell a bit of the story. Experimenting with Social Media to let the word out and build an audience.

Bringing out boxes of day-books to go through. Its overwhelming. Where to start?

When I went back to college as a Freshman in 1968 I thought I was going for an education. I had no idea that I had stepped onto a new road - to change my life.

The catalyst - the first- ever Women's Studies course at Dunbarton College, a small Catholic women's school, the last place one would have expected such a life-changer. The instructor was a founder of the first Rape Crisis Center in DC and a member of NOW, (The National Organization for Women).

My art history professor, artist Nancy Cusick invited me to accompany her to the 1972 Corcoran Conference of Women Artists, the first-ever national gathering of women artists. They came from across the country, sharing ideas and images and changing the way I looked at art and thought of myself as an artist.

Timing is always everything. I was a graduate student at American University in Graduate School during the organizing of the Women's Caucus for Art when AU Art History professor Mary Garrard was the second president. I volunteered to be membership secretary and processed a growing membership.

The Washington Women's Art Center was founded in 1972 and by 1974 I had joined it. Through WWAC I became part of the network in DC and nationally. In 1975-76 I was a founder of the Coalition of Women's Arts Organizations and, based in Washington, DC, found myself the lobbyist for the group - testifying before Congressional Committees and advocating for equal rights for women artists to federal agencies.

Talking has always been my strong suit - once I was told I should list taking on my resume - but I thing the lobbying was the true start of my career as a storyteller.

The CWAO experience as a lobbyist and grassroots organizer led to my job on the staff of the National League of Women Voters as ERA Campaign Director,1979 - 1982, the last three years of the campaign to ratify the Equal Rights Amendment. They hired me to represent the League with the other women's organizations, tend to the State Leagues and raise money for ERA.

Artists have ideas - we see things in new ways. It turned out that I came up with a new idea for the ERA campaign and for the League. I proposed and organized the National Business Council for ERA which brought the campaign support from Fortune 500 CEOs. Raised money and provided a professional umbrella under which The Ad Women of New York, could work with the ERA campaign.

It was a perfect combination - the League of Women Voters and Business. Our organizing co-chair, actress and business woman Polly Bergen was not just a name on the letter-head she was hands-on. We developed stategies around her being present and she came. I happily held her purse so she could wow them. ERA Board Chair Madeleine Appel and Lois Harrison were wonderful team members. And BPW ERA legend Mariwyn Heath was my mentor and supporter in the business effort. She told me at the end of the campaign - " I consider you one of my successes. I thought it was a dumb idea and did not believe that you could pull it off - - but I never said a word to discourage you." It was a good management lesson and I have never forgotten it.

Women did amazing things during that campaign. It was a dynamic volunteer grass roots effort, and inexperienced women learned their jobs by doing them.
Women cared about the issues and taught themselves the skills they needed to lobby effectively.

The loss of the ERA was heart-breaking for the supporters.

That's an outline. There are a lot of stories there. What to tell?
Posted by ELLOUISESTORY