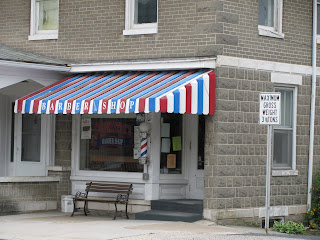 Saturday mornings this shop is filled
with men and boys
getting their haircut
and an occasional woman
like me.

I love hearing the town gossip
and the friendly back and forth joshing
among long time friends.

While I waited my turn
with my favorite woman barber
I watched this hair show.

When his turn came
a smallish ten year old boy with a mass of thick black hair
soldiered over to the barber's chair
and announced
in a loud, determined voice
"I want a Mohawk."
After the barber helped him onto a board across the chair arms
he looked toward the boy's father
sitting near-by
"that OK with you?'

The father nodded and the head shaving ritual began.

Afterwards the boy stood by as his father paid the barber
"That's eight dollars."
Then the youngster swaggered a bit as he followed his father onto the street.

"So that's how they do that - " I laughed to Bonnie. "Wonder what his Mom will say?"

I have a grandson who gets a mohawk every year the Saturday before school gets out. He wears it proudly for a week, they take lots of photos and then it's buzzed off for his summer 'do. I admire these kids' confidence!

You want to get to the point where you can take a whiff of the oil and have your body ready to rumble. You want to walk into the room the next day, catch the merest leftover scent of the massage oil, and smile at the memory of what you did in that room the night before.