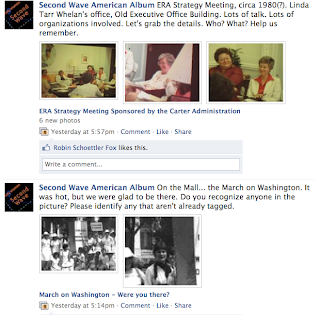 Several things collided that prompted me to get started sifting through the archives I have stored in the basement - and to do something with the stuff.

So - I have initiated a Second Wave American Album page on Facebook hoping to also catch stories from other people who were involved in the 1970s women's movement. It is set up for everyone to post, add pictures and comment.

The years between 1970 to 1982, the year the Equal Rights Amendment failed, were challenging and exciting. For me they follow two tracts - the arts and women artists and the ERA -
because I was involved on both tracts - although there was much overlap in people and purpose.

What happened to get me started on this?
P.S. -- If you are wondering what exactly I did in the 1970s and early 1980s relating to the women's movement, you'll find some of the details on my public Linkedin Profile at http://www.linkedin.com/in/ellouiseschoettler
Posted by ELLOUISESTORY

I first time visit in this blog. I find this blog have relevant information.