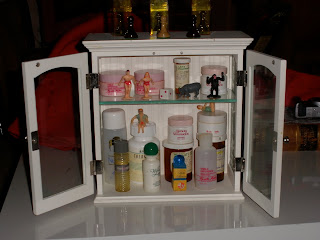 Cleaning out the basement - somethings are hard to let go. I found a large brown cardboard box filled with plastic bottles of varied sizes from large to tiny. I recognized them. During the time I was painting with acrylic paints I used these to mix and store special colors - so I saved many of the plastic bottles that crossed my palms.

The box was full to the top.
There must have been 300 bottles ready for paint.
I know. I know. They had to go.

But as I ran my hand through the box I touched memories. Times and places. Bits of history. Personal and local.

My solution - select some and install them in a small cabinet that was itself teetering on the edge of a throw away box. Voila - an art piece - a new album.

Why these?
What's their story?

a fat brown prescription bottle from Washington Circle Drugs - the drugstore in the 2430 Pennsylvania Avenue building where Jim had his first full-time DC office and where Shorty cooked Jim's mid-morning breakfast M-F . Jim ate it at the 1940s style soda fountain while caught up with the neighborhood gossip. Today that building is a suites hotel three blocks from George Washington University Hospital. Washington Circle Drugs is just a neighborhood memory.

two smaller brown prescription bottles from Packetts Pharmacy . Packets was at the corner of Connecticutt Avenue and Manor Road when we moved into this neighnorhood in 1970. It was a local pharmacy with a soda shop - a meeting place . My daughters have memories of sipping cokes and eating a sandwich there. Packetts was a casualty of the father's aging and the son's cancer. The building most recently housed a Smith and Hawken which closed in December - a victim of the shrinking economy.

You get the idea - the cabinet is an album - housing memories - prompting stories.

I will add more later.
Posted by ELLOUISESTORY

When I saw the plastic figures in your cupboard, I immediately thought of the book "The Indian in the Cupboard."

DO NOT LOCK YOUR CUPBOARD -- THEY COULD COME TO LIFE!!!

Oh, right, that book was fiction...

Why not put the story on a label and stick it on the bottles? Or if the story is long continue it inside?

I can see the headlines now:
2010 BRIARLY CACHE FOUND