Chat and a story with Storyteller Jon Spelman 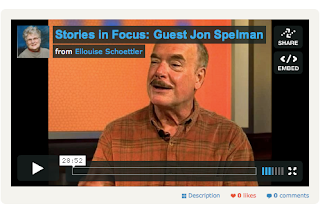 Something New - Stories in Focus on the Internet.
Today the program is a Chat and a Story with storyteller, Jon Spelman. click here and ENJOY.
This program is shown as it is currently being aired Wednesday evenings on Montgomery Municipal Cable TV.

The Stories in Focus series began in March 2009 on Montgomery Municipal Cable (Channel 16) Kensington, MD. Each month as Host/Producer of Stories in Focus I interview a guest storyteller. We chat about storytelling, which includes the guest's career. The centerpiece for the program is a story - told by the guest teller.

Channel 16 has a narrow reach - Montgomery County, Maryland. From from outset the I wanted to share the programs with you - the wider audience. Now, having crashed through the technical problems, I can.

Hear more of Jon Spelman March 20 - if you are in the DC Metro area. Come to the March 20 Official Opening Concert of Telling Moments Theater for a wonderful evening of storytelling with Jon Spelman.

About Jon Spelman: Guest Storyteller
Spelman has developed more than thirty hours of performance material, all of which he continues to present to a wide variety of audiences in a wide variety of venues throughout the U.S. and in Europe.

He performs at colleges, theatres, schools, libraries, festivals, museums, and arts centers. He was the first American to perform at the International Festival of Solo Performers in Tel Aviv, Isreal, and represented American performers at the Colloquim of the Revival of Storytelling held in Paris, France. ("Spelman's story was one of the big grand moments of this meeting," said Association Le Renoveau du Conte.)

Spelman has four times been a Featured Teller at the American National Storytelling Festival in Jonesborough, Tenn.
www.jonspelman.org

About Ellouise Schoettler: Host/Producer
Schoettler has been a professional storyteller for twenty years. She performed on the 2009 Exchange Place Stage at the National Storytelling Festival. Jonesborough, Tenn.. She will present, Pushing Boundaries, a new one-hour program at the DC Capital Fringe, July, 2010. www.ellouisestory.comhttp://www.vimeo.com/9624406