1. Today when I was telling stories about fathers at a local retirement home I asked the audience to tell something of their fathers. First, everyone named their father. Then it was time for memories. A ninety year old gentleman was the first man to speak. He told of his father, one of 15, who left home when there was no more room for him in the house. His father moved to London, then to the United States, became a veternarian and to sum it up, "was the finest man I have ever known." What a lovely tribute! 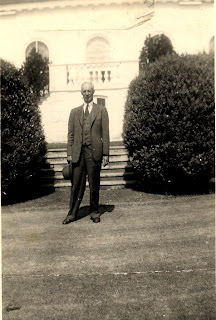 Reminds me of the time I asked Uncle Lewis, my dad's oldest brother, " what's you favorite memory of your father." He was silent for a few minutes - something of a rarity for Uncle Lewis who was quite a talker - then he said, "all of them Ellouise. All of them."

I don't write much about Sam Diggle - Papa Sam we called him - because I did not know him too well - and he was not a favorite of my dad's. Daddy was the "bad boy" growing up - always in trouble and that made for strained relationships with his father. So hearing Uncle Lewis say "all of them" gave me a new view of Sam Diggle -
and a wish that I had known him better. Or heard more stories about him.
Sam Diggle, circa 1944 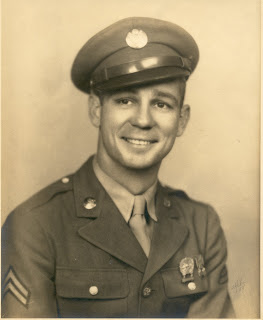 2. I love telling stories about my father, Robert Diggle - and having people enjoy him with me. There are plenty of stories about him, believe me.
Robert Diggle, circa 1943
3. Today the skies are blue and the sun is shining. Sometimes that is enough to make my heart sing.
Posted by ELLOUISESTORY