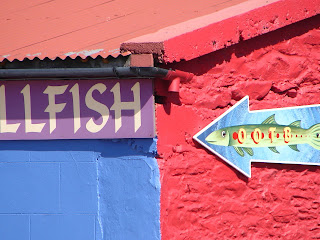 My cooking leans to simple and quick. My cousin Tom Hutchins used to tease me that I was the "casserole queen." In the 1950s the Campbell Soup ads were a treasure of recipes. They sold housewives on the idea of soup-based cooking.

Give me a can of Campbell's Soup and I could make a dinner. Still can - but today I have more fancy bowls for cooking and serving them. I now know that presentation is everything.

I learned to HouseKeep from Peg Bracken - turn the lights down, flowers and a cloth on the table, and even left-overs in a pretty bowl become a feast.

In the 1950s Friday was still a "fish" day for Catholics. My mother often made this tuna casserole for supper. It was good, inexpensive, and we all liked it. This recipe is so simple that I learned how to make it when I was in Jr. High School. So I took the recipe and Mama's Friday menu solution with me when I married. Our family ate this tuna casserole regularly on Friday and even after the traditional Friday fish rule was dropped.

INGREDIENTS:
one small box elbow macaroni
one can cream of mushroom soup
1 or 2 small cans white albacore tuna packed in water - depends on budget and how much you like tuna
long horn yellow cheese

Bake 350 degrees until it bubbles
Grate a cup of yellow cheese and spread on the top, return to the over to melt.

RE: The Picture - its as close as I can come to a tuna for an illustration - besides I was thinking that this time two years ago Jim and I were packing for our trip to Ireland. I took this picture the day our elderhostel bus was making the rounds on the Ring of Kerry.
and I was staring down the barrel of a significant birthday. Ahhhhh. I am looking down that same barrel again.
Posted by ELLOUISESTORY