The 28th Annual Washington Folk Festival - produced by the Washington Folklore Society - was held May 31 and June 1 at Glen Echo Park. I was telling a half hour of stories at 5 PM on Sunday.

Jim and I had business to do over the week-end so we did not get to the park until 2:30 pm Sunday. We went early especially to catch our friend Diane Macklin's 3 pm performance. So we were delighted to run into her in the parking lot and ride the performers' shuttle bus over with her. Diane has recently moved to Baltimore so we had lots of catching up to do. 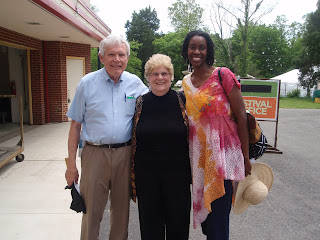 Diane still has a lot of storytelling business in the DC - Maryland - Va area. Including a new gig. This summer she will be telling two programs a month at the African Museum on the Mall. If you are in the area, check the Smithsonian Program calendar . Diane is a terrific teller. 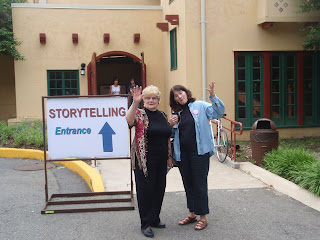 The storytelling sets were held in an annex of the old Spanish Ballroom. On a hot Sunday afternoon the air condition auditorium was comfortable and a good setting for stories. Storyteller Jane Dorfman ( in the photo) organizes the two day storytelling schedule. She was smiling as we walked up, saying that the two day event had run smoothly with a steady stream of adults and children forming good-sized and attentive audiences. 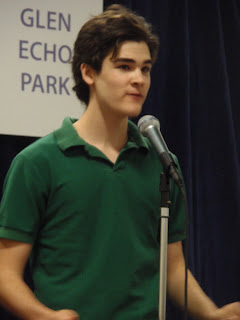 A group of youth tellers, The Twinbrook Tellers, had just completed their set when we arrived inside. I was glad to hear this young man.
Justin Burton-Metcalfe is a former teller with Twinbrook Tellers who is now performing alone. Justin is 16 years old - and a very polished and poised performer. He told three stories featuring dragons. The tales were complex and unusual and he told them well. 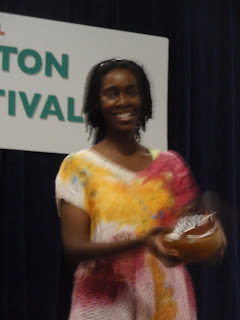 Diane followed Justin with two stories from Africa - stories from the Bontu people.
She opens with a kalimba in her hands and her long, slender and nimble fingers create da range of soothing sounds which are a wonderful bridge to her stories.

In both her stories her voice and gestures drew the audience into the story. She is a master at involving the listeners in a range of participation from words, sounds to hand movements. Children watched and listened wide-eyed as she told! 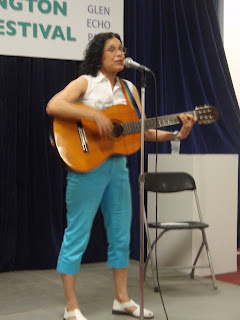 Barbara Efron accompanies her strong voice with the guitar and very effectively includes rhymes and songs in her stories. I really appreiciated one of her stories - in a very clever adaptation of the folktale, The Thrifty Tailor, she tells a story from her family history.

At 5 o'clock I took the stage with two stories, Rooster Calls the Sun,
one of my favorites, which has plenty of audience participation and
The Queen Bee, a Grimm's fairytale I have adapted as a southern story with an environmental twist.

Walking around the Festival area is always fun. Music is in the air, some on the stages and some from impromptu jam sessions among the picnic-ers. There are craft booths, food sellers, an old-fashioned carrousel which is a permanent fixture at Glen Echo, and dance groups in the Spanish ballroom.
Its a great event for families and there were many in evidence.
All made even better by a sunny day!
Posted by ELLOUISESTORY

Ellouise, a great description of this event. I wish I'd been there!

Do you use Coyote in your stry about Rooster?