A Night in Coney Island 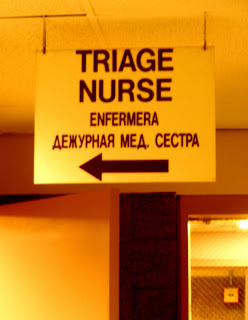 The triage nurse understood we were travelers and rushed my registration. She explained our situation to the attending doctor. He gave me the game plan. No sonogram was possible today, "We can admit you and give you blood thinners until you have your doppler in the morning - that is the safest thing." I fought back tears as I agreed to stay.
"I am so sorry, Jim. Our trip is ruined," Jim squeezed my hand. " Not ruined, changed."

It was 2 PM on a lovely sunny afternoon. They gave me a hospital gown and I settled down on the rock hard, rolling gurney that was my bed for the next twenty hours. I became "the woman who is waiting for a doppler." 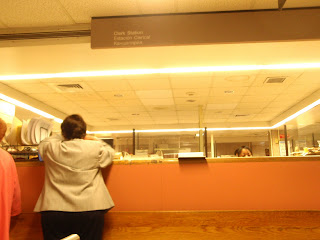 Patients were moved like dice on a playing board as the space needs changed. My first spot faced the nurses station and the corridor where all the new patients were wheeled in. I was startled when two NYPD policemen wheeled in a 300 pound young man who was handcuffed to the stretcher. He shook the side rails and shouted obscenities at the top of his lungs. This was a bird's eye view of an unscripted ER - - raw life as it rolls in. Since I was going to be in the midst of this mayhew for the next twenty hours I decided to watch. I took out my journal and a pen. Holding the camera at arm'e length I took my picture. 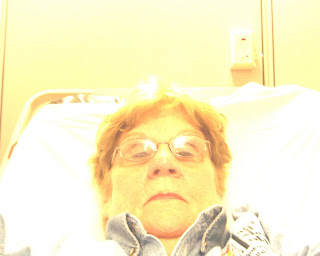 Jim went back to Argyle Road to pick up a book and a few personal things. And get some food for both of us. The irony of the whole thing was that we came here because Jim had wanted to protect me from what he knew the big city reality of Kings County Hospital was . Now I was "the woman waiting for a doppler", pinned like a butterfly under bright, glaring lights in the midst of a choatic ER in an old, dirty and crumbling , mid-size county hospital that was operating beyond capacity with overworked and hardened staff. I am being sent here for a lesson, I thought, or - a story.
When a nurse was putting the blood pressure cuff on my right arm her cell phone rang. She dropped the cuff on my belly and answered her phone in a very melodious language. When she finished I asked what language she was speaking," tagalog. I am from the Philipines." The ER was filled with staff and patients who spoke a mix of many languages - Spanish, Russian, Polish, and others I did not recognize - which mirrored the multi-cultural complexity of the local area. As a traveler overseas I would have been charmed by the novelty of all the languages; as a uni-tongue traveler I
found myself feeling like a stranger in my home country. Is this more the real world than the one I live in?
An old woman screamed, " Help me. Help me. Please help me. I need the pan." Nothing happened. She called out again and again each time her pleas were more urgent. I asked a nurse. "Can't someone give her a bed-pan?" "Someone will get to it" she responded as she walked away - in the opposite direction. The woman cried out, "I am not crazy. I am not crazy. I can't hold it. Please help me." It was if she was calling out into a deaf world. Finally her grown son located a bedpan and helped his mother, even cleaning her afterwards. I was grateful I was able to walk to the bathroom on my own.

Smiling Shirley, an eighty year old woman whose hair was dyed a vivid carrot orange, wore her pink volunteer smock proudly. She moved slowly from gurney to gurney asking "Anything I can do for you?" She stopped and chatted with the patients and their family members - asking about you, telling you about herself. She was a ray of sunshine, kindness and caring for all the patients - - and a good friend to the staff.

Jim returned with a deli-sandwich just as a nurse handed me a brown paper bag which was the hospital supper. Inside was a sandwich - a slice of American processed cheese stuck between two pieces of dry brown bread, a small individual-size bag of animal crackers and a plastic container of apple juice.

Time moves slowly when you are trapped. Jim would not leave me alone even though he had to wait two hours to snag a vacant straight chair. By midnight he was fading so he agreed to go to the car for a nap. Fortunately the car was parked just outside the ER door. The police officer stationed at the door assured him the lighted parking lot was safe.

It was hard to could sleep under the relentless lights surrounded by the intense noise. If I did drift off the elderly man next to me yanked me awake with a shout, "I need to pee." At one time I amused myself writing down "Mr. Jack's" ramblings. "What is this place? How did I get to this house? There are 40 bananas in the refrigerator. Somebody turn off the refrigerator. I don't like bananas." I don't know where he went in those moments but it was better than where he was - with people telling him to pee in his diaper when he asked for a "pee bottle." 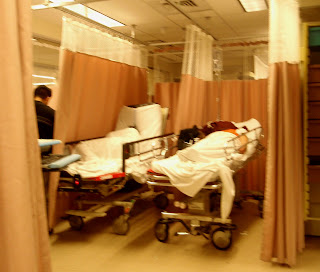 Human misery comes in many forms - two men who had had their faces smashed by attackers - swollen lips and eyes, broken noses; elderly sundowners who were hurting in mind and body, a young man with strange heart pains whose wife sat by his bed watching , chronically and seriously ill men and women, an asthmatic woman who uses several different breathing pumps a day but cannot stop smoking, and "the woman who is waiting for the doppler."

Sometime in the middle of the night they admitted a new young woman. A nurse shoved her gurney into a spot opposite me. They had a tough time starting an IV in her arm - it took several painful tries to finally get it going. Within minutes she was calling for help. Her arm was swelling. The needle was not in a vein afterall and the fluid was running into the space under her skin. She called out several times and no one came. She looked over at me. I told her, "Scream so they will have to come." She did. Nothing happened. She started to remove the IV herself. "Scream louder - so they have to come." She raised her voice. They came. " I am done," she said and signed herself out

By 4:30 am I was beginning to feel like I had had it. I was into my 14th hour. I was not sick, just waiting for a doppler, and I was beginning to feel closed in and a bit nutty. I called Jim on the cell phone and asked him to please come back inside. "This place is crazy. Please come and sit with me for a little bit." He understood. This was the reason he had not wanted to take me to Kings County. Jim had been an intern there and he was familiar with this sort of ER. I guess this was something I was supposed to experience .

AT 8 AM when the Chief Attending Doctor conducted rounds at someone nodded toward me and told him: " this woman is waiting for a doppler." He nodded and they were moving away. "Wait!" I called out. He stopped. I explained, "I am a traveler. I came for a doppler after they closed. They want to rule out a DVT. I have been here eighteen hours. Please help me to get out of here." He looked at me with kind eyes, listening with his full attention - he heard me. "I will see that you are the first one at 9am."
And he did.

Jim stood by as the technician checked my leg veins from top to bottom and twenty minutes later the Chief Attending came smiling to my side," Good news. everything is fine. You can go." Sore leg or not, I hopped off the gurney and into my clothes.

As we walked out I turned for one last look. It was quiet at 9:30 am. That would change. 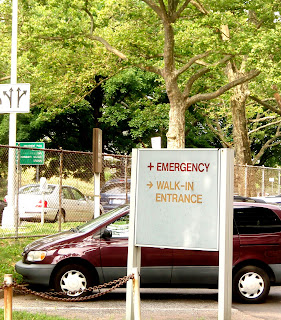 Jim and I were travelers - and we were moving on.

Thank God I could.
But I will not forget this place --

PLEASE hurry and tell us that your trip improved after your night in hell!

I should have guessed when you didn't blog for several days that you or Jim ended up in a hospital...

Hope your leg is better.

I think "A Night in Coney Island" is a version of the story "Things Could Always be Worse" in two ways: (1) you could have been one of those other patients; (2) you could have had DVT and been there LONGER!

Geez, Ellouise. Sounds like a horror film of a bad hospital. One more reason to avoid big cities. I'm so sorry your trip was ruined. You were so looking forward to it.
Like Kate, I hope things improved after you left Hell's kitchen.

I think Good Healthcare is like electricity.....when you have you don't think about it any different, when you don't, you sure are left in the dark. Imagine if your only access to healthcare was the experience you had in the ER. This is a real problem for alot of people in our country.

Unknown said...
This comment has been removed by a blog administrator.
3:11 AM

Unknown said...
This comment has been removed by a blog administrator.
3:16 AM

Unknown said...
This comment has been removed by a blog administrator.
4:32 AM