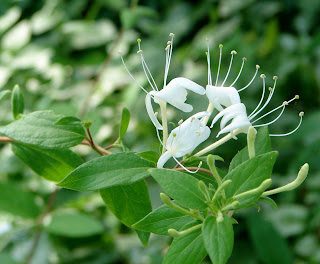 Honeysuckle vines have made themselves at home around the pond at our PA house. I know they are wild and invasive and some folks are annoyed when they show up but I am glad to have them. They remind me of happy summer childhood days in North Carolina.

Honeysuckle was the first flower I could call by name. I know it was the only flower I could drink from, sipping their delicious nectar just like the fairies.

Their sweet smell takes me right back to a time when the air was hot and steamy as I lay on the grass - doing nothing.

For those who need to know facts:
Lonicera periclymenum, known as Common Honeysuckle, European Honeysuckle or woodbine is a deciduous climber that grows up to 10 m high. It is native to much of Europe, growing as far north as southern Norway and Sweden; in Britain it is one of two native honeysuckles, the other being Fly Honeysuckle (Lonicera xylosteum).

It is often found in woodland or in hedgerows or scrubland. The flowers are creamy white or yellowish, trumpet shaped and very sweet smelling. It is commonly grown as a garden plant and numerous varieties have been developed for this purpose. The plant is usually pollinated by moths or long-tongued bees and develops bright red berries. (copied from Wikipedia).