Thinking About Next Week

Thinking about my calendar and all the good things coming up.

TOMORROW I will post the Life is a Verb interview with Patti Digh. 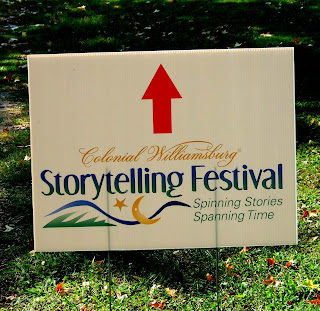 Only six more days til I leave for the Williamsburg Storytelling Festival.

Thinking about what stories I might tell.
And about seeing friends.

Seeing friends like storyteller Diane Macklin. Diane and I met a few years back when we told together with a small group of tellers, In Our Own Voices, in Washington, DC. We told stories together at the Art Barn, Rock Creek Park, local churches and art galleries. I enjoyed telling with her again last June at the Washington Folklore Festival at Glen Echo Park, MD. She is a terrific teller who reaches out and draws the audience into her stories and touches their hearts.

And Rich Knoblich. Rich and I told stories together last October at the Autumn Glory Tall Tales Festival in Oakland, MD. He writes and tells very funny stories. Our family discovered his stories at the West Virginia Storytelling Festival, could it be nine years ago, and we still laugh when we talk about his Viking Funeral story.

Milbre Burch is a headliner for this festival. This is a woman who can tell a story and give it a very special touch. She led me to storytelling and I don't even know her. More than ten years ago I heard Milbre Burch tell stories at the Washington Storytellers Theater. It was serendipty that Jim and I were even in the audience. She told a very moving story about her father. An epiphany. I squeezed Jim's arm. "I am doing that," I said.

Her story showed me the way that I could and would use to tell family stories so that my target audience, our adult children, would listen to the begats and family history I was finding through genealogy. It worked. I tell people I came to storytelling as a subversive activity. And found myself in stories and storytelling.

The Silver Screen
Movies from the 1930s are always a big draw for me.
Last night I watched a 1935 black and white movie on TCM - I forget the title - with Dick Powell and Ruby Keeler. It is a charming film with music and a predictable plot. Ruby Keeler wore lovely flowing dresses which draped so beautifully on her body and Powell was sweetly handsome . Do you remember his romantic songs and her snappy tap dancing. There is such an innocence and freshness in the characters that they are appealing even when they are sappy. The steadiness of the father - played by the same man who always played Judge Hardy in the Andy Hardy movie is reassuring. And, I don't know about you, but I really appreciate the flickering "silver screen" of black and white movies.

Mama was a senior at Charlotte Central High School when this movie came out. She probably saw it at the grand Carolina Theater on Tryon Street. I feel safe in saying she saw it because she told me Ruby Keeler and Dick Powell were two of her favorite stars. Do you suppose she and her friends danced down the stairs from the balcony after the film was over? There was a bunch of other stuff I should have been doing but I am glad I stopped and watched the movie.
Posted by ELLOUISESTORY