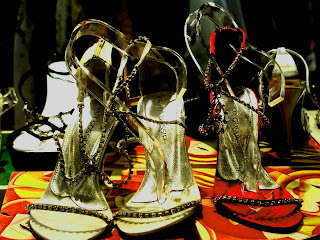 Nothing like a major shift in centuries - but I can't resist showing you these shoes.
This photo, taken near Norfolk, was mixed in with my Williamsburg photos. Boy is it out of place - stirs things up.
They stir me up enough to tell you what I am thinking. It will come as no surprise to anyone who knows me well - and that includes my history as a feminist activist. I have not introduced politics onto this blog - and probably will not again - but I am weakening today.
These shoes make me think of Sarah Palin - I guess because she is on my mind. I have been ranting about her all day. The final straw came when I went in to film my TV show, Stories in Time, and a guy in the studio and I had a charged - civil and friendly but charged- conversation about the current election.
We recognized the vast chasm between us - - in the way we see Palin as a candiate for Vice President of the United States.
He countered - I like her - she is a Hot Chick. He was not kidding or baiting me - that's how he feels.
Do you see that breaking the glass ceiling? I mean that is where women have been through out history. Its the Playboy standard.
I finally asked him. "How old is your daughter?"
"Nine," he says.
" Well every time you look at her ask yourself - how do you want her capabilities to be evaluated - by her boobs or her brains?"
He tossed that aside.
Its not a silly question. Think about it, for your self, your daughters, your grand-daughters, your neices and all those other girls and women who have ideas and ambitions and dreams. Sarah Palin is not there because she worked for it or dreamed it - she is there because some man called her and yanked her onto the stage to help him be President. The scary part is that he is an older and physically vulnerable man - which means she could end up President. Do you sleep well with that idea?
I wish I could be more profound.
I wish I could speak right to the issues - but are we blind? Can't we see what's happening?

The old guy has run in a "hot chick" to help him out.

Oops. Sorry. That was not nice. To speak ill of another woman. I am a feminist. We all think alike and will fall in line behind any woman who is moving up.

Let me tell you something - there is too much at stake - the cost is too high to be nice - and to keep silent. And to vote for an unqualified person - woman or not - for the second highest office in the country.

I would rather have Tina Fey - at least she knows its a joke.

Amen, sister. She may be "just what I (McCaine) need" but she's not just what we (citizens of the U.S. -- the world, in fact) need. A woman opposed to so many woman (and human) issues is not going to pull in my vote. Thanks for speaking out.