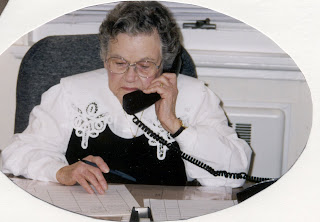 After Daddy died Mama was so overwhelmed with grief that we wondered how she would remake a life without him. Then an "angel" entered the scene. Father Paul Gary came to St. Patrick's and he reached out to Mama - asking her to become an active volunteer - as Sacristan at the noon daily Mass and to work in the office.

Again she was wanted, expected, needed. She bloomed as a member of the "amazing grays."

Mama and Father Gary continued their friendship even after she moved to Concord Place some 25 miles away. He and another member of St. Patricks visited her shortly before she died.

Father Gary spoke of his last visit with her during his Homily at her funeral Mass. He recounted the story Mama told him of how she met Daddy at St. Patrick's Cathedral and fell in love with him there. It was a beautiful story, very touching and sweet - exactly the way Mama would have wanted it. Except for one thing - it was a fantasy - another of the stories she created during the last months of her life.
Complete storyteller truth.

I loved it! Brava, Mama! Tell it like you wanted it to be.

Driving home I called Mama's sister. I told the new story to her. She was quiet. I could almost hear the puzzled look on her face. " Ellouise, that's not how I remember it."

"I know Punny. That's not how it happened. Mama rewrote the story."

This is the way Mama told the story to me - many times. 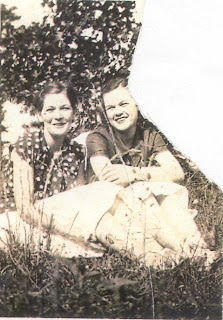 introduced them on a blind date. Daddy was so good-looking that Mama was smitten right away but when he called for a second date she turned him down - playing a bit hard-to-get. Her tactic worked. He called back and she agreed to go out with him.

Several months later they eloped to York SC. Morgan Heath and his wife Ruby drove them down to York and stood up with them.

Punny spoke up. "I remember that night (Punny was about 9 years old). Robert and your mother came back to the house about nine p.m. to tell Mother and Daddy. Louie told Daddy first. And when she told Mother - it was a shock - but Mother's first response was -

Louie you have married into a staunch Catholic family and the first thing you two have to do is go to St. Peter's and make things right with the Catholic Church." (Mama was a Methodist. Granny had worked with Daddy's great-aunt Annie Grose and knew the family and their connection to the Church.)

Punny added. "And poor Robert was really frustrated because your mother would not live with him until they were married in the Catholic Church." 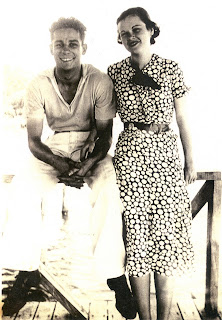 This is Mama's favorite picture of them - it was taken at Wrightsville Beach, NC in late August, 1936 - six weeks after I was born.

One of the first lessons I learned when I began working with genealogy was - don't believe the first version of a story and try to talk to an eye-witness if its possible.

I guess another thing to add is to watch out for storytellers.
Posted by ELLOUISESTORY

I didnt think I had ever heard that story - about them meeting in St Patricks.... Of all the stories I had heard over the years, I thought for sure I would have remembered this one... too funny.

Ellouise, she was so beautiful--and only 6 weeks after having a baby? Wow. I'm impressed.

Emily, wait until you hear the mystery story she told me. When she finished she said, "now I want you to tell the others." Coming soon. Ellouise