Tales in the Village - Megan Hicks and Nick Newlin 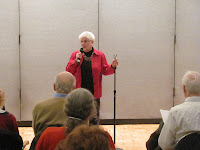 Tales in the Village

Opening the evening I was so grateful for a room filled with storylovers and storytellers. One thing you worry about when producing a show - will anyone come to hear the stories - particularly when you've asked a teller to come from out-of-town 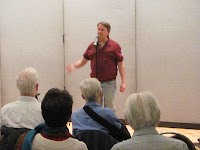 Nick Newlin opened the show with a well-crafted, funny and real story about how he settled down to a steady relationship with his wife Joanne. I had felt that Nick's stories and storytelling would be compatible as well as a complement to Megan's stories. It was all I had hoped. And, the audience loved Nick's story.
Nick Newlin is a regular storyteller at Speakeasydc - who has had a long time career performing on the Renaissance Fair circuit across the country. He and his wife perform together as the widely known act - Nicolo Whimsey. Relatively new to performing as a solo storyteller Nick is well on his way to a second career perch. 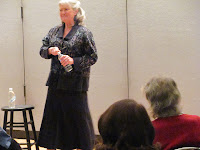 Featured teller: Megan Hicks. A wonderful show.  She told two original stories - -  with her wit and enthusiasm - from the heart. Megan's easy manner captivates her audience so that they enter her well-crafted stories, loving and relating to her characters. 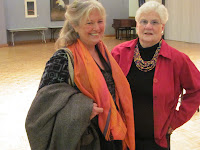 I have enjoyed and admired Megan Hicks and her stories since I first her - maybe ten years ago- - - always wanting to hear more. When we started this series, Tales in the Village, she was the first person I thought of  -

Megan was my guest on the TV show earlier in the day - talking about her love of history and how living in Fredericksburg, VA pushed her toward her wonderful Civil War story of the 19 year old Confederate - a good Samaritan to wounded Yankee soldiers.
Megan is also a very talented and imaginative artist. She called herself a trash artist and makes wonderful things from discards.
She brought a few of her pieces with her - - - - 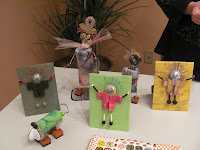 a nice value-add to the evening.
Posted by ELLOUISESTORY