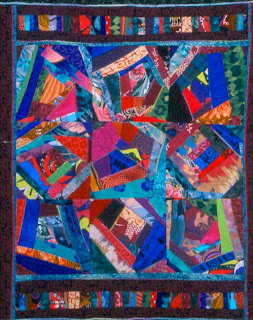 I woke this morning dreaming about sewing,
Thinking about my stash of men's old silk ties,
My horde of delicious colors.
Waiting.

Maybe its mentioning quilting yesterday.
Bringing that yearning out into the light.
Because I do yearn to sew again.
Snip and cut, stitch and stitch.
Making something new from old cloth.

I collect men's silk ties.
Jim tosses his ties my way instead of in the waste basket.
Others are finds at The Salvation Army, Good Will.
A few from a Rescue Mission.
People who know, bring them to me.
"Something for your stash Ellouise."

I am holding out two from Cres -
"I am letting go of these
They were my brother's -"
They shine in the basket - yellow silk and pink with dark dots."
Precious.
They will be just the right note one day.


I have used men's ties in a large altar cloth
and in a liturgical stole.
For a grace note in a tapestry.

Now I am going to start a larger piece
Twenty-five squares
Each a skewed log cabin.
For a wall hanging.

AN INVITATION In the tradition of old-time friendship quilts
I would love to include a tie from you -
and a story about it.
Just one thing -- silk only.

I will exhibit the piece and tell the stories either as a story or in an album.

What's GOING ON??
This is not my first collaborative project.

In 1978 - I made an Album, Woman IS... which included a paper quilt and an album of the words of 78 women artists from across the country. It was exhibited at Touchstone Gallery, Washington, DC.

In 1984 - I made the The American Album, a nine notebook album of art works by women from 322 states, which I took to the UN Conference on Women in Nairobi, Kenya in 1985. That project is now part of the Library Collection of the National Museum of Women in the Arts.

About 1999 - I created my favorite - a large altar cloth and hanging made for Foundry United Methodist Church, Washington, DC from clothes donated by the congregation - the fabric of Foundry.

Its time for another out-reach adventure. I hope you will be a part of it.
Posted by ELLOUISESTORY

Ellouise! I have a tie quilt! It was made in the 1950's in Florida, and the ties are arranged in sun-like circles; at the center of each circle is a round of yellow crochet.It's an amazing piece of folk art. I wish you could see it. Maybe I can take a photo of it and put it on my blog.

Ties are used not only for wearing but also used to express some love.
Once my friend gifts me a tie in my child days, I’ll protect it so far. It represents his love. I want to have it forever.
Thanks