Thinking About the Circus 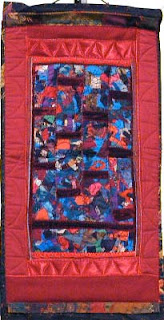 Recently my sister Kathy recommended I read Water for Elephants - and I am.
Last Wednesday night I told "The Elephant Man" - the story of an 1880 circus accident in Charlotte, NC.

I had not told "The Elephant Man" in quite a while so earlier that week I pulled out the file folder to re-read all the clippings from the Charlotte Observer that recounted the event that September in 1880.

When I opened the file I found a gift I had forgotten on the top of the papers.

My aunt, Catherine Diggle Brown, went back to Sacred Heart College in the 1960s to continue her education. She reveled in it. She told me she particularly loved one of her English classes where they were required to do some creative writing. And, when I began storytelling, she gave me a few of her stories - " a few extra bits for you to use in your storytelling." (This fabric piece, Catherine Diggle Brown, is bordered with red wool from a cape she made, wore and then gave to me.)

I am sharing this one with you. She is talking about a morning in
the 1920s. In the line-up of eight Diggle children my Daddy was #4 and Koki (that's what we called Catherine) was #5. They would have shared this day.

Childhood Memories of the Circus by Catherine Diggle Brown.

The circus is coming to town! Those words are again ringing in our ears each time we turn on the radio or the television set, and every newspaper carries pictures and advertisements describing it in fascinating detail. The children are eagerly awaiting its arrival, and when I see their enthusiasm I'm carried back thirty-five years to the circus days of my childhood.

Whether or not my brothers, sisters, and I attented the yearly appearance of the circus in our town did not detract from the pleasure we experienced over its arrival. For weeks before it came we eight childrren had discussed it at length.

We had then, two things that children of today are missing. First, the arrival and unloading of the lolng circus train, and second, the exciting parade through the very center of town prior to the matinee.

My father would wake us at four a.m., load us into our old Packard touring car, and quickly make his way to the depot where the train was to be unloaded.

Here we would find hundreds of people with squealing excited children watching, open-mouthed, the fascinating proceedings. Each member of the circus personnel was busy; the performers, the train crew, the roustabouts, and even the animal trainers. The placid camels chewed and chewed, and the wild animals added to the general noise with their roars.

But the most interesting of all to us children were the elephants. How magnificent they were! They could shove the animal cages around as easily as we move checker men on a board, and their slow lumbering motions had us entranced. Each gaily-painted cage and truck that was unloaded brought forth louder and louder cries of delight from us all, and we would watch each one make its way down the road toward the fair-grounds until it was out of sight in the faint haze of sunrise. By the time the last one had disappeared we would begin to realize that we were cold and hungry, so it was back home for all of us to a good hot breakfast.

Circus Day during my childhood was fun from start to finish because all of the schools were closed. This was done so that everyone could attend the parade at eleven o'clock - - and such a parade! The Ringmaster, resplendent in his red and black unifoprm and high silk hat, and riding a sleek black horse, led the procession. Next in line was the circus band with each member in a red and gold uniform. There were beautifully dressed girls on horsemack, elephants wearing gaily colored velvet or sating trimmings, clowns by the dozen performing tricks as they danced along the street, and many a child received the thrill of a life-time when a clown would stop to shake his hand or pinch his cheek.

Then would come the animal cages; roaring lions in one, a leopard or two ub another, bears of all sizes that, through the eyes of a child, looked ferociouis, and then a cage containing large snakes. How relieved we all were to see that this particular cage had thick glass sides plus the usual iron bars.

The steam calliope was always one of the most thrilling sights for me, and for days folllowing the parade I would attempt to imitate the sounds that it made.

If I take my children to see the circus this year, I can be sure of one thing. When the band strikes up its opening tune, I shall close my eyes and once again tingle in anticipation of that marvelous spectacle of my childhood. I wonder if they still use the calliope!

Isn't she wonderful! I can hear her voice, her joy in remembering and in telling stories about the things she wanted to share. When I tell stories I feel close to her and I do not miss her as much.

Would it surprise you to know that she was named for Catherine Lonergan Cobb - a girl of Tipperary - Koki's great grand-mother. My great, great grandmother. The Irish connection - rich with blarney and love of story.
Posted by ELLOUISESTORY