Stories at The Camel 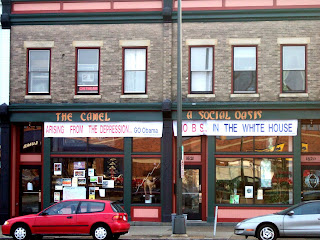 The Camel - a Social Oasis. Whatever is a social oasis?


In this case, the oasis, is an inviting space for music, comedy and storytelling at the edge of the sprawling Virginia Commonwealth University urban campus in Richmond, Virginia. Founder Alan Schintzeus is making a home for storytelling on West Broad Street.

Tonight was the kick-off for the storytelling series, every third Sunday evening at 7 PM.
The series is organized by VASA (the Virginia Storytelling Alliance).

My sister asked me, "why on earth are you driving two hours to tell a ten minute story? are you crazy?" No, I am not crazy, and as we digested the evening on the drive home, Jim and I agreed it was worth every mile to hear these top-notch tellers and to be transported by their well -crafted and wonderful stories.

Kim opened with a first-time telling of a touching personal story about her childhood - not one of her crowd pleasing hilarious tales but one that was soul wrenching as she invoked the healing power of story. She lightened her set with a short story about childish larceny and her father's wisdom.

In the Open- Mic session that followed the tellers told tales that ranged from Linda Goodman's tender Applacahian love story to Adam Booth's wild and whooping original tall tale. Helen Qubain told a story of the upside of being downsized. Anthony Burcher opened the session with a charming childhood story and it ended with Megan Hick's compelling telling of a memorable folktale Davy and the Devil. I really enjoyed a story of "relationships" told in a very free, open form of tandem by Judith Onesty and Les Schaffer. Slap in the middle of the line-up I told one of my favorites, my original story, The Tatooed Man.

It was an evening in the finest company - a promising launch for the series.

Next month, March 16, Megan Hicks will be the featured teller.
Posted by ELLOUISESTORY

You know...you really should be writing for a newspaper. Well done Ellouise! I couldn't have described the evening any better.