A day of contrasts.

Jim and I went to the movies after 5:30 PM Mass. My friend, Pat, had recommeneded The Savages which was playing at the Avalon a couple of blocks from the church. We made it into the darkened theater just as the movie opened.

The theater was so packed we were lucky to find seats. I hate having to stumble over people to seats after the movie has started because I hate it when people do it to me. Once settled I was too embarrassed to crinkle the paper and open my Raisinets so I sat clutching them like a kid while the first scenes of the movie unfolded.

In short, a brother and sister in their early 40s have to step in and take care of an elderly father
as he approaches death and dies. There are funny aspects. And, heartbreak. Laura Linney who plays the daughter is nominated for an Oscar. But from my perspective its the father played by Philip Bosco who was riveting.

The screen-play is weirdly funny. And you welcome any and all laughs. There are scenes and situations that came very close to my personal experience and it was hard to watch them. There were other situations when I was aggravated at the shallowness of the son and daughter. Let's just say it is not an "easy" movie. Is it worth seeing - yes.

Yes, to face the reality of life and life ending.

On a happier note.

Earlier, as part of a collaboration project between Pyramid Atlantic and Silver Spring Library I told stories from my program, "Fur, Feathers, and Scales" and then artist, Sabeth Scarborough led a book-making activity. We had a nice sized enthusiastic crowd of parents and children.

Using a simple fold bookstructure the children collaged images from the stories. Sabeth brought wonderful materies i.e. printed felts, feathers, markers of all kinds, a set of letter stamps, glues, and other fabrics. 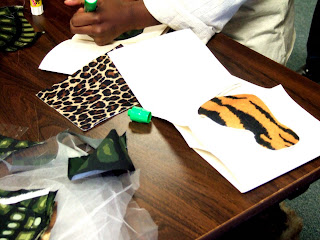 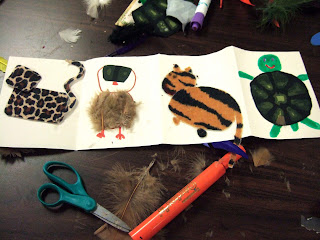 "Rooster Calls the Sun" - She told me that in her picture the sun was waiting behind the mountain while rooster tried to call it forth. 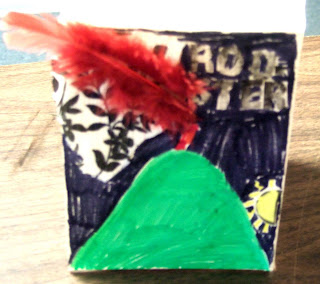 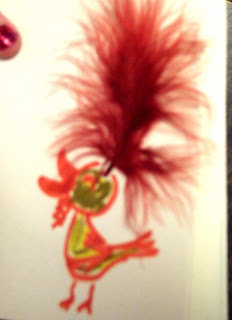 Meet the rooster as intertreted by another child.
Posted by ELLOUISESTORY

I love the artwork! What a great idea. Where did you learn the rooster story? It's one of my favorites, but I've only been able to find two sources for it.