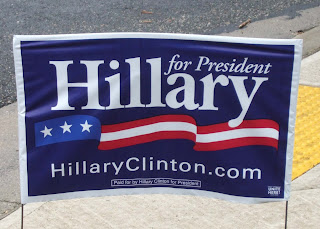 Today I voted in the Maryland Presidential Primary and I voted for Hillary Clnton - and as a woman I was thrilled to vote for a woman. Not just because HC is a woman. I am not blinded to the state of the country and our need for a new leader. In my opinion she is a fine candiate and has the "stuff" to lead the country.

There is no denying that I am a feminist and at one time I was an activist feminist. I worked hard to support and win the Equal Right Amendment. Anyone remember that? The campaign to ratify ended in defeat in 1982. Such a simple thing - to put Equal Rights for women in the Constitution.

It was sleeting when Jim and I drove into the local elementary school parking lot. And cold, bloody cold. Several women, one an artist from Gallery 10, were cocooned in heavy coast, hats and blankets sitting in the weather at their posts outside ready to hand out campaign literature. There were more election clerks and judges inside than there were voters so it was a quick trip. A momentous moment over in a minute. A minute that will have such an impact on all of us - no matter who comes out on top in the election.

A very frail and halting elderly woman was leaning heavily on her daughter's arm just ahead of me in the line to sign in to vote. I thought of Mama. She had told me the night before that she was not gong to get to vote in the NC Primary. 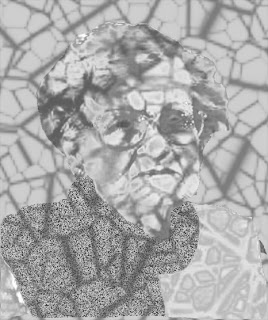 "I wish I could vote." I don't agree with her on her choice of candidates but I wish she oculd too. "I thought the "place" would make arrangements to take us - but they didn't."

More and more I hear from her how it feels to be side-lined by age and infirmity. I hear it in a different way - as a road I am walking toward.

No, no, not me!
Posted by ELLOUISESTORY