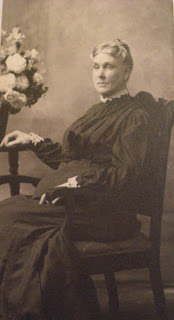 She is my - my great, great grandmother.

Here she sits in a posed studio portrait. When my Aunt Catherine, Koki, gave me the original larger picture, framed under glass, she said, "here she is Ellouise - "herself" - sitting up straight like the Queen."

A Glimpse of Elizabeth Pyburn Grose.

A bit of back-story.

Elizabeth Pyburn was born in London, England May 5, 1835.

I don't know what year she came to the United States or whether she married Samuel Grose in England or America. (P.S. - This is a genealogy lesson - Read Carefully. Tonight- after I wrote this - I checked the Grose file and re-read her obituary - She came to America with her husband Samuel Grose - and they lived in Maryland for two years before the moved to NC. )

But I do know her first child, Mary Louise, was born in Pikesville, Maryland in 1859. Mary Louise is my great grand-mother. Her oldest daughter Marie Louise married Sam Diggle and they are my father's parents.

By 1860 they were living in Charlotte, NC 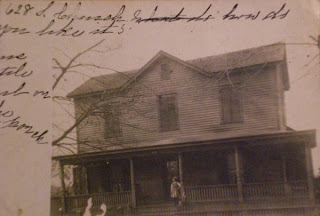 They built the house on Church Street in the 1870s. Her daughters Annie and Kate and her son Ernest lived in that house until the late 1940s.

Catholic Masses were said in the Grose home by a circuit riding priest until St. Peter's Catholic Church was built on Tryon Street, about six blocks away. Elizabeth Grose was a pillar of the church until she died. IN 1905 the Grose family gave the land next door to the church where O'Donoghue Hall was built as the first Catholic School in Charlotte. . My daddy and his siblings went to that school. The last time I looked the building was still standing behind St. Peter's Church.

The family story is that Samuel Grose was a mining engineer and he came to Charlotte to work for the Mint. For a while they had a dry goods store in Charlotte but it failed. I only have a few papers and they leave curious clues. A "pass" for Samuel Grose as an agent for the Confederate Army. Papers for Elizabeth Grose when she filed her intent to apply for citizenship in her own right. A copy of her obituary and her will. There are days when I think I should just put other stuff aside and finish pulling their story together.

I often think I write these notes as bread crumbs for some curious soul who wants to follow the trail.

I do have a family story about Elizabeth Pyburn Grose. Koki told it to me a dozen years ago when I was collecting family "ghost" stories.

In 1920 my grandmother, Louise Diggle, Elizabeth's favorite grand-daughter, was seriously ill in Mercy Hospital. The doctor's held out little hope for her to "make it through the night."

In her bedroom at 628 South Church Street Elizabeth was also seriously ill. Her daughters Annie and Kate were sitting up with her late in the night. I can imagine Aunt Annie, siting as straight-backed as her mother, with her rosary beads in her hands.

Elizabeth roused up. Annie and Kate urged her to be still, "Rest, Mama."

"No, I want to tell you about Louise. I have talked with the Blessed Mother. This is how it will be."

"No. I have talked with the Blessed Mother. Louise will get well. I will take her place. I will die tonight."

And that is how it happened.

Ellouise, That is a neat story. Glad she made them listen to hear so they would know. Take care, Debbie

Ellouise, I should have pre-viewed what I wrote. I really meant to say that I was glad she made them listen to her so they would know. Makes more sense. Debbie