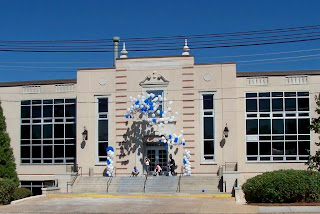 Tonight my high school class is gathering in Charlotte, NC for our 55th reunion. I know there will be lot of hugs, laughter and stories. And, I am missing all that. This little girl stayed home.

Choices are so hard.

When I accepted the invitation to tell stories with the NIH Philharmonia tomorrow night - I did not realize the conflict. And later - when I really focused on it I first thought I would race to Charlotte and then zip back up the road - nine hours - on Saturday in time for the concert. Clearly ridiculous. I had to choose. And I chose Scherazade.

Truthfully there is another big reason - I have not been back to Charlotte since Mama's funeral and I am not quite ready to go yet - especially not on Mother's Day week-end. I will be telling a story about her instead - as part of the Speakeasy show, Mommie Dearest on Sunday.

I will be thinking about my classmates tonight. I do miss being there. Many of us have known each other from elementary school until graduation. We carry many of the same memories. 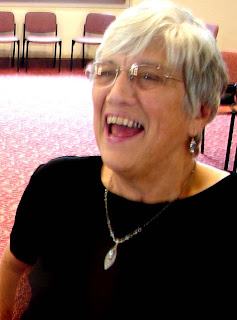 I talked to Betsy yesterday as she was collecting herself for the drive to Charlotte. I am grateful she is stopping by for supper on her way home to PA on Monday evening. She will have some stories. It will be more fun to hear them in person than on the cell phone in my Toyota phone booth - the way we usually talk. I know we will be laughing. Isn't the laughter what's part of the joy of being with good old friends. People who know you - and you know them - and you don't have to edit your thoughts or what you say.

My other reason - the challenge of crafting and telling these stories from The Arabian Nights 0r 1000 and One Night however you call it.

I remember the first time I heard one of these stories. Sister Mary Loyola read Ali Baba and the Forty Thieves to a group of third grade girls on a rainy afternoon at Sacred Heart Academy. I was fascinated by the image of calling out "sesame" to open the mountain to enter the robbers cave. I am not telling Ali Baba. I am telling the Merchant and the Genie which is actually three stories folded into one and its been quite something to condense it into the time I have for the telling.

In the 1980s I bought an old Oxford Classics Volume of Burton's translation of The Arabian Nights for 25 cents at The Trading Post, a thrift shop in Madera, CA. I used it as a sketch book on week-end with Jim at the wonderful Ventana Lodge near Big Sur, CA. I still have the book - somewhere. But I did not read the stories then - the print was too small and they had no "pull" for me.

No better way to "learn" stories than to tell them. I have come to really understand and love the magic of the tales. And what's more - I am finding out that there are other adults, like me, who have never read them and enjoy hearing the original stories - not the Disneyfied versions - they read to their children and grandchildren or see in the movies.

It sounds like you made the right choice. Have fun.

Never been to any of my high school reunions but....last year a few sentimental individuals organized a reunion of my 6th grade graduating class of 1953 and it was a HOOT!! Of the 50 or so that were in that class, would you believe we found 34 of them. It was a bit like a family gathering since these were the kids you spent everyday, all day, with in classroom and on the playground for six years. And....you played with many of them when school was out!

Alan, that sounds wonderful - and I think you have touched on the reason so many in our high school class are still so close and want to get together often. There is a lunch once a month at a local restaurant - anyway - many of us went to elementary school together - and, as you say, spent days with each other every day. Those early bonds are tighter than we realize aren't they?