May Memories - 1 The Little Dutch Girl

I am continuing to pull May threads forward to recapture memories and stories.

During WWII Daddy was shipped over-seas to India. Mama was left with three little girls. She also held down a full time job at Morris Field, outside Charlotte, working as a secretary in the Army Dental Office. She was 27 years old. 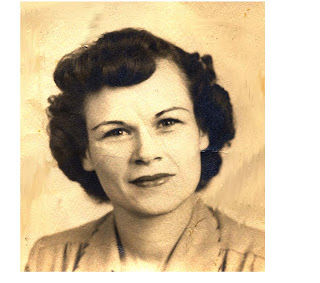 It was tough. But she worked it out. Emma came early every morning to take care of the three of us. I am the oldest, then Lynda, and then Kathy, the youngest - the one Mama called her "piece of baby."

Yes, things were going pretty well - until Polio, that thief of children, rolled in one Spring. All parents were afraid. Children were kept at home. Then they did not call it "social distancing" - but that's what it was. And, the fright of it was too much for Mama. She needed to stash us somewhere safe - and she decided that somewhere was Sacred Heart Academy, Belmont, NC.

Her sister, Punny, had just graduated from Sacred Heart which was a girls boarding school 14 miles away. Daddy's family, an early NC Catholic family, had long-time connections with the Sisters of Mercy at Sacred Heart. 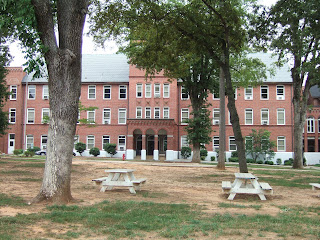 I don't know who pulled what strings but Mother Superior agreed. Lynda and I were packed up and taken to live with the Sisters for the summer. I was 7 years old and Lynda was 5. There were three other children there for the summer too. Kathy - the piece of baby (3) stayed home with Mama and Emma.

Initially, being away from home was a shock and I was very homesick and cried myself to sleep most nights. Mama came every Sunday and called us every Wednesday night at 6 pm. - on the dot. Because of Polio we could not come home all summer.

(This may sound harsh so I should tell you that my cousin Janice, 6, was the first child to die from Polio that summer. Mama told me years later that Janice's funeral was one of the saddest things she had ever been to - and she was glad we were with the nuns.) 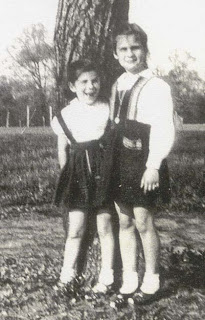 In the Fall we stayed on at Sacred Heart for the school year. I was in the 3rd grade and Lynda was in Kindergarten. By this time I loved Sacred Heart. It felt like home. Mama still came one week-end a month and we rode the Carolina Trailways bus to Charlotte at least once a month. Lynda and I lived in two worlds. Somehow Mama juggled both.

Every year the students at Sacred Heart appeared in a May Day Pageant - with a traditional ribboned May Pole. Each class performed a dance from a different county. The program was held on the back soccer field near a large grey stone summer pavilion. All the students - from Kindergarten to seniors in high school participated. We practiced once a day for weeks ahead so that it would be perfect by the time the parents came.

Lynda's kindergarten class was assigned the Mexican Hat Dance. My third grade class was assigned a Dutch Girl Dance. The sisters took each class to a large attic room crowded with rows of metal racks of costumes, white First Communion dresses and long dance dresses in every size. We were each given a dress to wear but there were no white Dutch girl hats. The mothers had to make those. A letter was mailed with a pattern and instructions.

I waited and waited. Everyday I looked for the package from Mama. All the other girls were receiving their hats. The day before the performance my hat was still not there. I fought back tears. The day of the performance we lined up in the stone summer pavilion. Sister was annoyed. "Ellouise where is your hat?" What could I say. Mama had not sent it. I was afraid Sister would tell me to drop out of the line. Then I looked up. Mama was running across the field toward the stone pavilion. She was waving something that looked like a white flag - my Dutch girl hat.
Just in the nick of time. 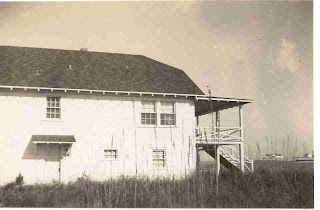 When school was out for the year Mama took us to Wrightsville Beach to live in my grandmother's house for the summer. I wore my Dutch Girl hat every day - everywhere - as a sun hat. And when I wore it Mama usually told me that it had been really hard to make it. "Look how well it worked out."

Every afternoon Mama walked with her three girls to the ocean-side church - "Our Lady by the Sea" to light a candle and pray daddy home.

To reach the church we had to walk across a soaring wooden- slatted pedestrian bridge over the Sound. This bridge climbed to a high point in the center to allow clearance for high-masted sail boats. We always stopped at the top to watch the sail boats glide underneath us.

One afternoon I leaned against the railing looking down into the green water below. My hands were stretched out over the water far below. I was holding my white Dutch girl hat. The white ties dangled freely , fluttering in the breeze. I watched, as if it was someone else's hand, as my fingers opened and the white dutch girl's hat dropped away - riding an air current like a sea gull - floating slowly down, down, down until it landed on the top of the green swells. It floated for a moment and then the water swallowed it up.

Mama saw it - too late. "What are you doing? Don't you know how hard I worked on that hat?"

Post script:
I was sorry to lose my dutch girl hat. I thought about it sometimes , as you do, when you look back. Mama and I occasionally talked about it. Then I forgot it.

About 20 years ago the genealogy bug bit me and I became absorbed, obsessed really, with finding out who I was and where the families came from.
One day when I was visiting Mama and Daddy in Charlotte I went to the Carolina Room of the Charlotte Public Library for some some genealogy sleuthing. I found a book, The Tunis Hood Family Book,. The charts and genealogies and stories in that book laid out the lines which connected Mama's grandmother, Alice Shaffer Hall to the Mecklenburg County pioneer Tunis Hood.

Tunis Hood came to Mecklenburg County in about 1767 from Augusta County, Virginia. Before that he had lived in West Virginia, maybe before it was West Virginia. His father John Hoed was a Dutch surveyor. He came to West Virginia with a group from the New York colony. As I recall, John Hoed was killed by Indians during an uprising.

I found another book that linked into the Hood Book and learned more about the Dutch connections - and my head filled with visions of clipper ships and wooden shoes.

And I remembered my white Dutch Girl hat - and loved the serendipity.

"Oops!" All you could say was, "Oops!"What did it take you? As few as some hundred and fifty words or so to get us all to fall in love with the little Dutch hat? And you end a great story with...."Oops!" :)

I agree - but what is there to say - when you have really screwed up?