The nearest Catholic Church when we are in the country is in Gettysburg. Yesterday as Jim and I rode in for Mass on Hwy #34 we passed the edge of the National Battlefield - shrine to the bloodiest battle of the Civil War which occurred here in July 1863. State monuments to the Fallen dot the edge of the road that winds through the acres of battle field.

Cars were parked along the shoulders of the road and there were small colored picnic tents scattered on the grassy field perimeter. 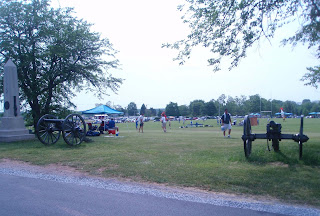 Kids of all ages rush after balls in a multitude of soccer games taking place across the battlefield - the bloodless skirmishes of a 5 state soccer tournament on fields once soaked in the red blood of violent battle. We were early for the 9 am Mass at St. Francis Xavier Church - time to once again take in the calm and beauty of the simple large room of the old building. The sanctuary is flanked by four large painted glass windows on each side of the room. The church is old. Well-kept. This building was turned into a hospital for both North and South during those bloody July days in 1863. I guess the spell of Memorial Day was on me because I found myself wondering about the pain, death and suffering that these walls had seen during that time.

At the time for the Sermon a stocky, elderly Deacon approached the pulpit. I admit it - his opening did not grab my attention but then I heard," I guess there are some here who might remember hearing about the "screaming eagles" of World War II. The young men of the 81st and 82nd Battalions who jumped behind the German lines on D-Day. They parachuted in to assist the landings on the beaches of Normandy."

His voice deepened. He choked with emotion. " I was with the 82nd Battalion - there were 200 of us in our group. Only 80 survived."

He paused. Waiting until he could speak again. "We were all just kids."

"Recently I was with a friend who served in the South Pacific theater - on the islands, during World War II. He asked me, Rich, do you think it was worth it? Its funny. We must have been thinking about the same things. I thought for a long time and then I told him. "Yes, I think it was worth it.
It was for the kids."

There was a family sitting in front of us - a father with three daughters dressed for soccer. The picture of the Gettysburg Battlefield and all todays soccer combatants flashed in front of me. "Its for the kids."

After Mass when I saw the Deacon-speaker standing alone on the steps I went over to him. "Thank you for your words today." He smiled.
"Did you say you jumped with the 82nd?" "Yes, I did."
Suddenly his eyes filled with tears. He put his hand over his face for a moment. He looked back into my eyes. "People don't understand. They just don't understand."

I touched his arm. "I know we don't. But your story helps make it real for us. Thank you."
Posted by ELLOUISESTORY

For the kids. Maybe the ons playing on the battlefield were an affirmation of his words.

Yes. That's what I thought too.
I loved this collage of accidental "awarenesses" that turned into a story. Its a lucky day when I am awake to them.