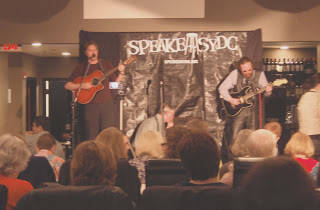 Jim and I went to the monthly Speakeasy DC line-up last night - that's the second Tuesday of the month. I will tell you more about the tellers and their stories later today.
Right now we have to prep for the cleaning ladies this afternoon and get ready to head downtown for an appointment. See you later.
Later than I thought getting back to my Speakeasy report.
The Speakeasy slogan is true tales - told live. There is a special charm to that and it draws standing-room only crowds of people who want to tell and to listen.
During the intermission I asked a few people how they discovered Speakeasy - three told me through a friend and the fourth was attending to hear a friend tell his story. All were enthusiastic about the experience.
The tellers apply ahead and are, in some cases, coached before appearing. The informality makes for an authentic and informal experience of storytelling.
Last night there were seven storytellers. All were first timers at the Speakeasy mic. Each teller was allotted seven minutes for a story that fell under the theme; COMING OF AGE: Stories about Proms, Weddings, & Other Rites of Passage. All the stories fit the theme and revealed a bit of the personal history of the teller. Two tellers, Christoper Love and Karl Operle, were stand-outs for me. Each told a story 0f a rite of passage which involved a parent - Love's was his mother and Operle's was his father. Both stories were well-crafted and laced with touching humor and truth. Each teller was in good control of his story. I really appreciated that each one honored the 7 minute deadline - which in my opinion respects the others tellers and the audience.
Opening the evening program, Carolyn Rapp told a delightful personal reminiscence of Sherry Geyelin as a tribute to her.
Posted by ELLOUISESTORY