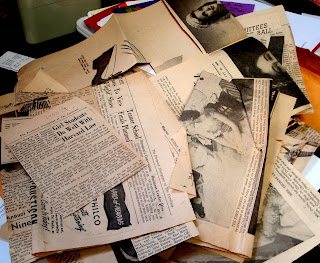 My friend Jennie called. " we are cleaning out the basement and you wouldn't believe what we are finding." Oh, yes I would. I have known for years that she had a complete archives of her childhood - and that meant some bits of mine - stored in her basement. Jennie and I have known each other since the 2nd grade at ElizabethElementary School in Charlotte, NC.

She read headlines and bits from newspaper clippings to me. It was a slice of 1953. Some of it meant nothing to me but - then - "hey, here's a picture of you when you went to Wildacres for the Civitan Youth Conference."

Yes, I had gone to that summer conference. I think of it everytime I tell "Swimming" - I am not a swimmer and I almost drowned in a dammed up mountain pool that summer while I was in the mountains learning to be a good citizen. "I would love to have that."

"You can have more than that. I can't throw it away. I will give it to you - and you toss out what you don't want.." 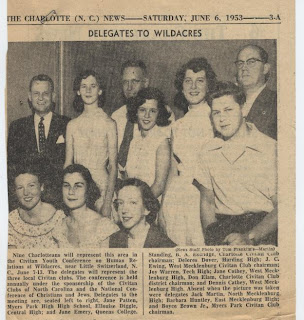 And that's how I came to have this picture - I am the second from the left on the front row. 1953 - the summer before my Senior year. It did happen. This is a keeper.

I have read all the other yellowed clippings and felt a little like a time traveler. I enjoyed them - but not enough to keep them longer than it takes to make a couple of collages.

I will be grateful to Jennie much longer than that.

2. Storytelling and Books:Two programs this afternoon - a schedule over-lap and my attempt at bi-locating.

Teaching with Adjoa Burrowes today. We led a project where a group of middle school students made accordion books using the wonderful strong brown paper of grocery bags.

Immediatley afterwards I told stories for an after-school program in another school that fortunately a short drive away. When some of the older students decided to join the group they were skeptical that it would be "any fun" because it was "just storytelling. " I loved seeing their faces as they became caught up in the stories and enjoyed it inspite of themselves. Ah,the magic of storytelling.

3. Artist Willem de Looper
We have lost another wonderful artist in Washington. Painter Willem de Looper has died.
I did not know Mr. de Looper but I have admired his paintings and he has been a part of my daily world. 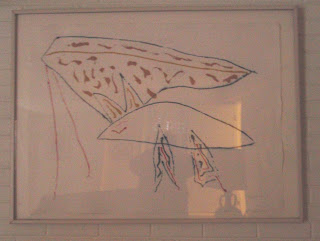 For more than 15 years we have lived with a marvelous piece of his work - a large hand-made paper pulp painting. When I can take a fair photo I will add it.

In 2008 there was an exhibition of de Looper's work at the AU Katzen. See some of his work.
and from another exhibition in 1996.

I particularly like this sketch book which was included in the 1996 show.

I was fortunate enough to have a somewhat similar experience this past year with some of those old newspaper clippings and they were also centered around the year “1953”. That was the year I graduated from my elementary school and the 6th grade. This past June we had a reunion of that 6th grade class and it was a complete blast. After 55 years, getting to see those classmates and playmates from those cherished years was just a joy.

I put our reunion booklet together so I was privileged to see numerous newspaper clippings similar to the subject clipping in your post. And although all the clippings were returned to their owners, the modern technology encompassed in the 'scanner' allowed me to at least keep a good copy of some of those old treasures.