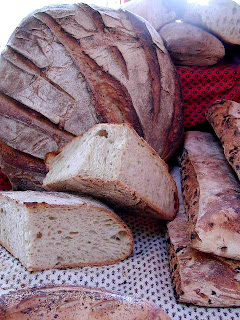 Maybe you remember my writing in January about storyteller Donald Davis telling me how easy it was to make bread, delicious bread. He inspired me to want to have home-made bread - made in our kitchen. I convinced Jim to try it.

You notice I said Jim should try it. I threw in the towel with my making bread in the 1970s when I was cooking natural foods and trying to be a whole- earth person.

We gathered all the stuff we needed from the Williams Sonoma baking stone to King Arthur Flour. At the ready we turned on our old oven and - it died. Pronounced gone by the electrician.

There was the search for a new oven to nearly fit the hole in our wall which was made to fit ovens fifty years ago. Then we found the right carpenter to make the adjustments and install it.

While all this was happening in Maryland, my sister in Georgia decided to watch the internet videos I told her about and try the new quick-making bread method on her own. She followed the example of the Easy Bread guy. That man doesn't use a baking stone, relies on a relic of a stove and whatever else he has at hand. Probably doesn't even bring in King Arthur flour.

She called me. "Have you tried that bread making yet?" Well we hadn't because we got side-tracked by the plans for Jim's surgery. "Why." She explained that she had - I felt a twinge of jealousy - she was making her bread first.

" Ellouise my bread turned out hard as a rock. I made two batches of it to give it a fair test - but with the second batch I made three smallish loaves and they were rocks - nothing but rocks. I threw out two and kept one as a weapon."

I still have hope for ours - we have the bread stone - maybe its the secret.

But in the meanime I have learned something about Bread - even if we have not made any.

Man does not live by Bread alone.
I wrote on this blog and elsewhere asking for prayers and good wishes so that Jim would go to the hospital on this Friday with a network of "his people" cheering him on for healing and recovery.

Your replies with warm, loving and touching support have been over-whelming. "His people" have gathered.

This week-end I began asembling the album of love and encouraging good wishes and prayers for Jim - and me.

You are an amazing group.

You are nourishing BREAD!

We thank and love each of you.
Posted by ELLOUISESTORY

I'll be thinking of you and Jim -- bread is a great metaphor, rising as it does because of little living yeasts. I know that when Jim makes bread, it will be wonderful! My uncle and aunt have stopped buying breakfast cereals, as their own homemade bread is more wholesome (and cheaper). BTW, since Donald Davis began this bread saga, have you kept him up-to-date on the developments?

Yours will be the first twitter (tweets?) I've sought out to read. Technology has so many potential uses.

I had to laugh about your sister's bread! I hope you have better luck.

The album of good wishes will be the talisman, along with your love, that Jim will take into surgery with him. You will both be on our minds this week as you take the step in your journey.

I was browsing through a catalog and found a coffee mug with an Apache blessing. I thought of you and Jim:

May the sun bring you new energy by day.

May the moon softly restore you by night.

May the rain wash away your worries.

May the breeze blow new strength into your being.

May you walk gently through the world and know its beauty all the days of your life.