The sky is early-morning gray and snow is falling outside my window. Yesterday Jim and I were coat less and enjoying a spring-like day. Glad we had a field trip while the weather was so lovely and balmy. 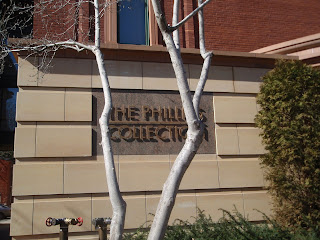 Jim had an early long-break in his patient schedule - nice. He also had a doctor's appointment downtown. Ever the opportunist I suggested we make a quick stop at the Philips Gallery on the way home. Looking at art is always a welcome and soothing diversion for me. It was not a surprise that Jim agreed because the Phillips is a favorite stop for both of us.

The new Giorgio Morandi show, which we had hoped to see, was in private preview for press only. So we visited with the long-time staples of the Duncan Phillips Collection. 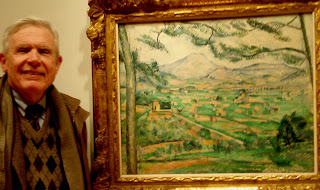 Sometimes its hard to really see these pictures by Bonnard, Cezanne, and Renoir because they are so familiar. You have to remind yourself that when they were painted and first seen they were revolutionary and raised a ruckus with the French Academy.

Jim was drawn to a Cezanne painting - a view of Mont St. Victoire - partly because of the painting itself and partly for the memory of the day we were there. After a visit to Cezanne's studio we drove out toward that mountain, stopped and took pictures - our personal postcards of the pilgrimage. "Let me take your picture - I will pair it with one I took when we were there - for a story." 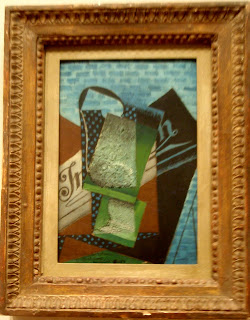 This small painting and collage by Juan Gris was my "find" for the day . The blue brick-work pattern in the background drew me to the composition. I found myself thinking about how I could accomplish this kind of composition with random patterns from magazines. Just what I needed - absorbing distraction.

And, I liked that the composition is powerful even though it is a small work. I have been itching for some magazines and glue and to do some cutting and pasting - collage is my favorite medium.

Collage is so accommodating - you can make them anywhere .

In fact I first focused on making collage when I worked for the League of Women Voters on the ERA and traveled frequently. Before I was hired by the league I was painting six foot square abstractions in my studio so I had to fit art-making into what I was doing. When I was on the road I could cut and paste away in a hotel room after the day's work was done. Since I have made collages in hotels, other people's kitchens, airplanes and hospitals.

I will take glue, scissors, paper and magazines to George Washington Hospital next week when Jim goes for his surgery. 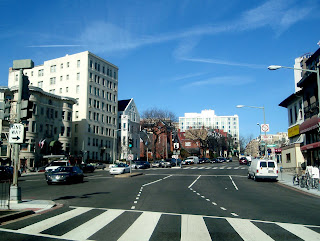 We drove home up Connecticut Avenue - our usual route - enjoying the familiarity of our drive home and talking about the art works - savoring the field trip.
Posted by ELLOUISESTORY

our love, thoughts and prayers will be with you and "honorary grandpa" Jim always, but especially over the next few days and weeks.

with love from the Solorzano-Lowell family: John, Susan, Kathryn & David

Jim.. I'm thinking about you tonight and keeping you in my prayers. I'll be waiting to get the good news tomorrow that you're doing well..
Love to you,
Dena